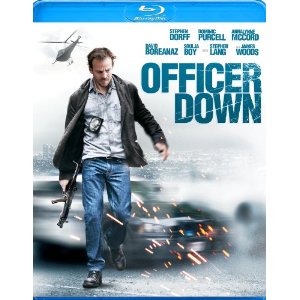 Officer Down plays like dozens of dirty cop films before it, with a few twists taken from countless heist films. Though I have a predilection for originality in my film-viewing experiences, occasionally a predictable film is constructed in such a way which is alternately satisfying. A captivating actor or compelling cinematography can take a simple film to new depths. Unfortunately, Officer Down doesn’t have much to offer that is memorable, much less mesmerizing.

Stephen Dorff stars unconvincingly as Detective Callahan, a dirty cop who is saved by a seemingly selfless stranger. We join him when he is already on the straight path as a loving husband and father, not to mention a dedicated cop. There is no explanation for his behavior previous to the revelation, nor do we see the transformation. For this reason, the two versions of our protagonist seem so starkly different that it is hard to accept them as the same.

When our morally righteous Callahan is approached by a man claiming to be the one who saved his life that night, he feels an obligation to help him. The favor asked has to do with a man attacking women at a local strip club, but as Callahan investigates, he becomes further entangled. All the while, he goes rogue on a secret investigation; Callahan must use some of the dirty tricks he learned to keep his involvement from his co-workers.

This film drags for far too long before giving the final twisted explanation is divulged. By the time I had reached that point, I hardly cared. The acting isn’t terrible. It just isn’t great. Same can be said for the cinematography and just about every other aspect of this film. The Blu-ray has no special features.