All Superheroes Must Die Blu-ray review 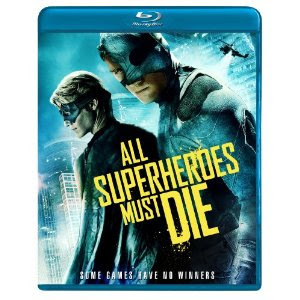 Credit must be given to filmmaker Jason Trost for his low budget enthusiasm. After creating the absurdly melodramatic futuristic comedy about a Dance Dance Revolution type gang war, The FP, Trost returns with much of the same gang to make this unconventional superhero film. All Superheroes Must Die contains the same melodramatic acting as The FP, although this time it doesn’t appear to be for humor’s sake. This weighs down the film, even when the creativity of the entire endeavor is admirable.

In many ways this appears to be the type of superhero film that a group of brainstorming writers was able to create on a shoestring budget. Our heroes awake at the beginning of the film in confusion, discovering that all of their superhuman abilities have vanished due to the manipulations of an evil villain. This is a rather convenient and clever way of avoiding special effects. The other wise money-saving decision was to cast a name actor as the villain, and then shoot all of his scenes in one set with hardly any other interaction with the other cast members.

Unfortunately, creativity alone is not enough to make a good film. There are admirable qualities to All Superheroes Must Die, but the seriousness and overbearing melodrama makes the shining qualities a little duller. Perhaps if Trost spent more time behind the camera instead of in front of it, there may have been more focus in the acting. Instead we have a bunch of unknown actors showcasing their abilities and overshadowing the minimalist elements of the film which work. James Remar is easily the most effective actor I the film, but not because he is able to play a sad scene better. All of the unknown actors seem to be playing for the serious scenes, whereas Remar has a comical time. Despite being the villain, he is able to lighten the film up a bit in a much needed way.