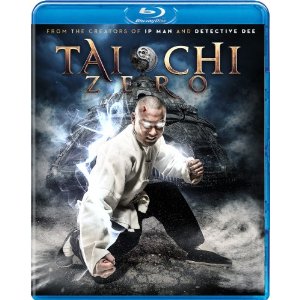 I feel that it may have been helpful to have known that this was just the first installment of a continuing story, because I was left slightly unsatisfied with Tai Chi Zero until a trailer for the sequel was played at the close of the film. This is not to say that Tai Chi Zero is a bad film, but simply one which is not fearful of getting sidetracked in the storyline, leaving many issues unresolved even at the film’s conclusion. Fortunately, Tai Chi Zero is so frantically entertaining that it doesn’t matter if the storyline doesn’t quite reach a point of satisfaction. If anything, it just delays an inevitable onslaught in the sequel.
Our title protagonist is Lu Chan, a man referred to as “the freak” because of his ability to fight with abnormal strength when hit on the birthmark he wears on his head. He travels to the legendary to learn how to harness this ability with the Chen Style Tai Chi, but is turned away for being an outsider. After repeat attempts and repeat failures, the outsider’s persistence pays off slightly. He befriends an old man who doesn’t teach him, but instead offers advice on how to win the favor of the town.
This is where the film shifts focus some, with the introduction of the film’s villain. A former son of the village returns in a steam powered machine and plans to build a railway right through his former home. This is objected to by the village, leading to an all-out fight. Lu Chen sees an opportunity to be useful to the village and does his best to contribute. The film is not action-packed, leaving room for humor and slight romance as well. It is a quirky kung-fu film with much more than just good action, although there certainly is some of that as well.
The Blu-ray includes a behind-the-scenes feature, music videos and a trailer gallery, but the highlight of the package is the high definition presentation of this enigmatically visual film.