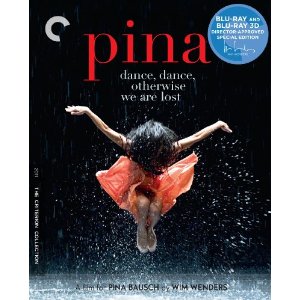 It may seem that an art house film, and a documentary no less, would be among the least likely to utilize the technological advances of 3D to enhance the spectacle of a film. Often spectacle is far from predominant in art house films, though this is hardly the case for Pina. Pina belongs in the category of films that were created due to the spectacle of 3D, which finally allow audiences to experience on film what is better seen live. The same could be said of any Cirque Du Soleil filmed performances, which always seemed to lack the same magic they had live. Now these performances can come alive in a new way onscreen.

Though the 3D dancing is quite amazing in Pina, it is not what one might conventionally expect from dance performances. This is not to be compared to the type of 3D dancing you might find in a Step Up franchise film. The legendary Pina Bausch created modern dance works of art that are intensely emotional and experimental. The spectacle is marvelous, though often the meaning is complexly hidden within each viewer’s interpretation. These dances must be seen on their own to be fully appreciated, whereas this documentary is more of a love letter for the departed dancer and choreographer for those who are already familiar with her work.

No one is more familiar with Pina’s work than her longtime friend and fan, filmmaker Wim Wenders. Wenders and Pina had planned a film collaboration for years, though it wasn’t until Wenders watched a 3D concert film of U2 that he realized the potential for the medium. They were in the process of bringing this vision to life when Pina passed away, and the project became something of a memorial for the marvelous German dance pioneer. The film is part performance homage and part bio-documentary, with interviews from loved ones and footage of her performances.

The 2-Disc Blu-ray release includes a Blu-ray 3D disc, as well as a standard 2D Blu-ray disc, both with a high definition digital master approved by the director, Wenders, who also contributes a commentary track to the feature film and the deleted scenes. Special features also include a making-of featurette, behind-the-scenes footage and a booklet insert with essay, a company list, and a guide to the dances performed in the film.