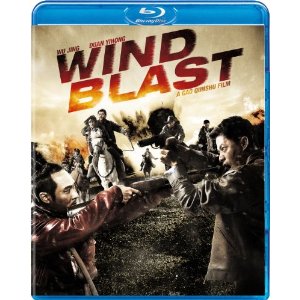 At the center of Wind Blast is a typical crime storyline, though the methods of delivery are higher octane than your average film. With a majority of the film taking place in a remote desert, there is plenty of room for countless action sequences between sparse moments of dialogue. What is truly impressive in this modern Chinese western is the versatility in the action despite the remote location. Throughout the desert there are car chases, martial arts battles and bullet ballets. Some of the best action films work because of their simplicity, and Wind Blast could be no simpler.
The story is essentially good guys versus bad in the middle of nowhere. A former boxer named Zhang Ning (Xia Yu) is hired to carry out an assassination, but takes a photo of his employer for extra insurance. When he sneaks back into for his pregnant girlfriend, Sun (Charlie Young), both the police and a group of assassins are hunting for him.
Detective Leopard (Duan Yihong) is called onto the case, along with his former teammates, Mastiff, Yak and Shepherd. These four highly trained cops meet their match when they come across a group of assassins led by Mai Gao (Francis NG) and A Nuo (Yu Nan). The assassins have been hired to destroy the evidence, which means they must kidnap Ning. The former boxer continually changes hands as the good guys and bad guys fight over him for the end result.
Wind Blast is nearly two hours long, though little of that time is stagnant. Nearly all of the film is respectably filled with suspense and action, making this an impressive Blu-ray release. The high definition is impressive, from visual to audio, though the special features are somewhat lacking. There is a making-of featurette as well as some behind-the-scenes footage.