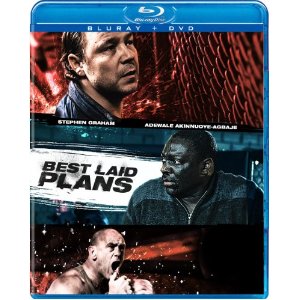 To say that Best Laid Plans is loosely based on John Steinbeck’s novel ‘Of Mice and Men,’ is essentially just because the story revolves around a man who cares for a mentally retarded man of a much larger stature. All other aspects of the novel fall to the wayside, and perhaps that is for the best. I was hesitant of an adaptation of the classic piece of literature. It seems silly to even claim any connection between the two, especially since anything will pale in comparison to the source material. That being said, Best Laid Plans is a surprisingly entertaining, albeit occasionally frustrating, crime film.
Best Laid Plans is set in the underworld of , where the compulsive addict Danny (Stephen Graham) relies on the brute strength of Joseph (Adewale Akinnuoye-Agbaje) to survive. Joseph has the mental age of seven and hates violence, but Danny is so deep in debt that he must put his friend in a series of underground cage fights. This torturous storyline is counterbalanced when Joseph meets a mentally retarded girl who is being bullied. Their love story runs parallel to a romance that Danny begins with a call girl.
Much of Best Laid Plans is painfully awkward to watch. These characters exist in a dark world, and Danny often turns to drugs and alcohol for a release. Joseph is more innocent and simply wants to be near his new girlfriend, but is constantly pulled back into a world of violence in order to protect Danny. The acting is great and some of the dialogue is spectacular, but the film as a whole is too somber for its own good. It is difficult to forgive Danny for the way he seems to use Joseph.
The Blu-ray includes a DVD copy as well.