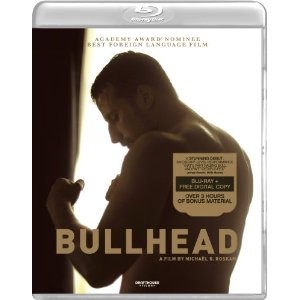 Ever since Nicholas Winding Refn’s Pusher trilogy, which began in the Tarantino-influenced 1990s, I have been a fan of Danish crime cinema. Not since then has a Danish crime film or director provided a character study as compelling and visceral as Michaël R. Roskam’s Academy Award nominated Bullhead. Each frame is assuredly presented in a way which appears completely intentional, unfolding a uniquely confident debut.
The simplistic storyline is given added depth with the complexity of the protagonist and his dark past, which is shown to us through a series of flashbacks. A childhood trauma leaves cattle farmer Jacky Vanmarsenille (Matthais Schoenaerts) with a heavy reliance on illegal steroids and hormones, which he also uses on his livestock. After making a deal with a notorious Mafioso meat trader being investigated by the police, Jacky becomes a part of the investigation. The only thing protecting him is a childhood friend working with the police as an informant, who also just happens to have a debt owed to Jacky.
The investigation becomes increasingly heated when a federal agent investigating the use of illegal steroids in cattle is killed, and suddenly everyone with a connection to the crime is in danger. While Jacky should be more concerned with the investigating police, he becomes obsessed with a girl from his past. Schoenaerts gives a remarkable breakout performance as Jacky, though it is a character of few words. Bullhead itself is not dialogue heavy, but gets a message across with the power of well-placed images. Even the scenery and supposed throwaway shots have purpose to the themes within the storyline, all building to an inevitable climax.
The Blu-ray release of Bullhead is one of the first for Drafthouse Films, who have begun a solid tradition of insert booklets, a practice previously reserved for the prestigious Criterion collection. The Drafthouse inserts often include comments from fellow filmmakers, and Bullhead is no exception. There is a brief essay from Michael Mann on the film, as well as an excerpt from an interview with actor Udo Kier on the film. The sixteen-page booklet also includes some of the film’s excellent photography in some still shots, and the disc itself also has plenty of special features.
There is a director’s commentary with Roskam, as well as a making-of featurette. There are also a series of interviews, both with Roskam and his star, Schoenaerts, and a short film which the two also collaborated on.