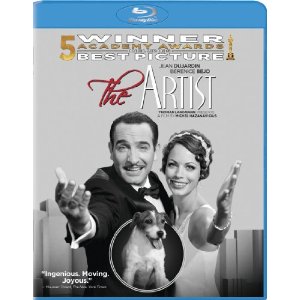 Not since the very first Academy Award’s ceremony in the 1920s has a silent film won Best Picture. After Wings in 1928, the silent film went by the wayside, aside from the few masterpieces that Charlie Chaplin would produce for the next decade. The Academy Awards became so preoccupied with dialogue and sound that it became rare for a film to win Best Picture without having also being nominated for Best Screenplay, and yet The Artist was the film to sweep this past year’s ceremony. Winner of five Academy Awards, not to mention countless other honors, The Artist is certainly a must see film, though I would still prefer a classic Chaplin film over this modern silent film any day.
The story is rather simple for The Artist, making the stylistic choices the most significant factor in the film’s success. Taking place in 1927 , The Artist is about the switch from silent to sound in the film industry. Those who were once stars are passed over for new talent, actors with voices to match their looks and acting abilities onscreen. Suddenly the stars of yesterday become obsolete, and George Valentin (Jean Dujardin) is one of the superstars to fall from the greatest height of fame. He becomes an unknown at the same time that a fresh young girl named Peppy Miller (Bérénice Bejo) rises into fame, but only after they have crossed paths with each other.
Though it is ultimately a film about fame and show business, the relationship between the former star Valentin and the newest wonder Miller takes the forefront of The Artist. Otherwise it is simply about a man who must come to terms with his limitations after the technological advance of sound in film. That being said, I have a certain level of admiration for the amount of material which is conveyed through image alone in The Artist. This is a simple film, but one which is incredibly well done, from the directing to the acting and definitely the cinematography as well.
The Blu-ray release includes a blooper reel, as well as a series of high-brow featurettes. There is a making-of featurette, as well as one on the locations of the film and a Q&A with the filmmakers.