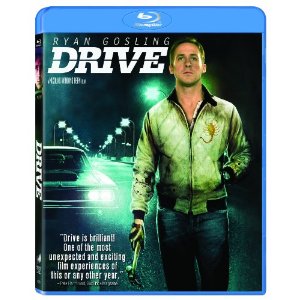 On average, I watch about 600 movies a year. Sometimes it’s more and sometimes it is less, but I will only watch a small percentage of them more than once. The truth is, very few of the 600 are altogether memorable. Some are praiseworthy but I feel no emotional connection to them, while others are indulgent but less than adequate upon later examination. Then there are the perfect films. The ones which not only have the ability to keep you thinking for days, but also grab you in a way which almost feels personal. In 2011, for me, this film was Drive. A culmination of a director I have long respected, an actor I very much admire, and a promising premise taken from a book by James Sallis resulted in the best film of the year. 1 in 600.
Ryan Gosling stars as a stunt driver who moonlights as a getaway driver for criminals at night. This job pays much better but it also comes with added risks. These risks are avoided by careful planning and precise maneuvering, as we see in the opening sequence. This is one of the most intelligent car chases I have ever seen on film. These risks are fine until the driver becomes somewhat involved with a beautiful young mother (Carey Mulligan) living next door. Suddenly he finds himself pulled in on a job which goes wrong, involving a pair of wicked criminals (Albert Brooks and Ron Perlman), and he is forced to take action in order to protect his innocent neighbor.
The storyline is rather simple, and the filmmaking simplifies it even further. We are not given lengthy scenes of dialogue to fill us in on back-story, and occasionally we even leave the scene before the dialogue has even begun. In one amazing sequence the driver is walking through a grocery store when he notices his neighbor, Irene (Mulligan). At this point it is clear from his facial expression when he sees her that he wants nothing to do with her. Perhaps he wants no attachments or maybe he has another reason, but instead of approaching the woman and her son, he retreats down another aisle. As fate would have it, he walks out of the store just as Irene discovers that her car won’t start. As well as being a stunt driver and a getaway driver, our antihero protagonist also works with a mechanic (Bryan Cranston), and again we see the look on his face, hesitating before approaching to help. The film then cuts to a shot of them in their apartment elevator. We don’t need the unnecessary dialogue. We know everything we need to know from the images, and with the help of a pop-electronic soundtrack.
This has been a good year for Gosling, whose range has always been excellent. This year he had success with a romantic comedy in Crazy Stupid Love, a political thriller in George Clooney’s The Ides of March, and with Drive he has made another masterpiece at heights as great as Half Nelson. Shoot, this is even as good as The Notebook. Gosling’s performance comes as no surprise, however, as he has never been short of excellent. What truly surprised me was to see how much director Nicholas Wining Refn has come into his own. He was born and bred amidst the Dogma ’95 movement of Danish cinema, but while he debut feature was certainly shot in natural surroundings with mostly non-actors with natural light, Refn’s Pusher was also a stylistic and graphic gangster film resembling the type of films Quentin Tarantino was making in the 1990s. Followed by two sequels which were each better than the last, Refn showed promise from the very beginning. His films have otherwise always proven to be worth watching, though some are more impressive than others. Each attempts to intellectually approach the art of filmmaking while telling otherwise straightforward stories. He is one of many filmmakers, including Tarantino, who have elevated the genre film into an incredible art form. Drive is Refn’s masterpiece.
The Blu-ray release of the year’s best film includes four featurettes and an interview documentary with Refn. The featurettes are precise and thoughtful, though there are layers even deeper within the film that aren’t really delved into. Sometimes it feels as though featurettes are made not to spoil the film, rather than directed at the audience who has already watched it. These are better than most, though the interview is far more revealing. High definition is certainly the way to see this film, which has one of the best soundtracks of the year in between the few major car chase sequences, and all of this is captured excellently on the 5.1 DTS-HD audio. There is also an instantly streamable Ultraviolet copy for home computers and mobile devices.

‎"Drive" is the most memorable film I've seen in the last 6 months, and South Africans have called it their favorite movie of the year! I can't believe the Academy overlooked it!