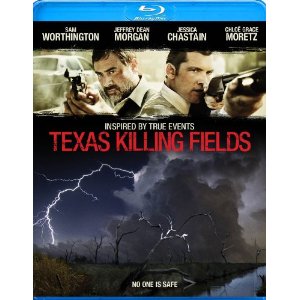 
Texas Killing Fields does not come with many twists and turns. There are no secret bad guys who appear innocent or corrupt cops doing the killing. The people who appear bad are likely to actually be bad, and this allows for a straightforward crime film which stands on story and characters alone. And it stands rather tall in a genre which can often feel tiresomely familiar. Even with no surprises or revelations, Texas Killing Fields is an impressive film because of good filmmaking alone.
Inspired by true events, this crime thriller follows the investigating done by homicide Detective Heigh (Jeffrey Dean Morgan) and his close friend and partner Detective Souder (Sam Worthington) after a serial killer begins dumping bodies just out of their jurisdiction. The corpses of the women and girls being slaughtered and dismembered are dumped in a marsh called “The Killing Fields” by locals.
Despite warnings by his partner, Detective Heigh insists on pursuing the investigation which they aren’t responsible for. This ends up attracting the attention of the serial killer, who begins playing his own games with the detectives. This includes targeting a young local girl (Chloë Crace Moretz), who has always been able to rely on our protagonists when her home life was too difficult. In a race against time, they set out to save the girl and catch the killer.
The Blu-ray includes an audio commentary with director Ami Canaan Mann and writer Donald F. Ferrarone. The actual high definition presentation of the film is not exception, but this is mostly because of the lower budget and grittier feel to the photography. It just doesn’t make as much of a difference, though there are a few shootouts and chase sequences which are certainly enhanced by the 7.1 TrueHD surround sound.