The Ides of March Blu-ray review 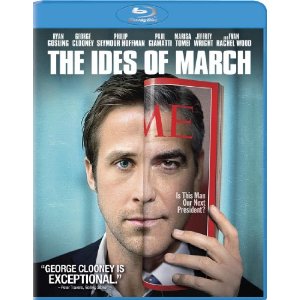 The Ides of March is a unique and brilliant film about politics, bringing a view which was profoundly effective first in the play by Beau Willimon, who lent a hand in adapting the screenplay along with director and co-star George Clooney and his writing partner, Grant Heslov. What makes this film so profound is not the fact that it exposes corruption and all kinds of backdoor bargaining going on within a presidential campaign, but the manner in which the layers of individual mistakes can effectively coerce any given political decision. And it does all of this with spectacularly written dialogue and immaculate performances all around.
The film follows in just a brief portion of the election campaign, during the primary which may determine the election’s final results down the line. These tense few days are given added pressure after a series of coincidental events force presidential candidate Governor Mike Morris (George Clooney) to rethink his strategy. Although he always seems to be present, hanging on the wall nearby or on television in the background, this film is less about Mike Morris than it is Stephen Meyers (Ryan Gosling), an ambitious campaign worker who has a lot to gain from the election of Morris. Working only under a close friend (Philip Seymour Hoffman) and the Governor himself, Meyers is both idealistic and hard-working, though this does not necessarily make him incorruptible.
Clooney started his directorial career with a lot of flash, and some critics called his debut over-directed. Then Clooney dove deep into films about politics. The Ides of March takes elements of all of these, though each more subtle than before. Clooney has come into his own as a solid filmmaker, as well as an actor. The Blu-ray release of The Ides of March includes a 1080p high definition experience, along with 5.1 DTS-HD audio. The special features include a commentary track with Clooney and Heslov. There is also a featurette with Clooney, and another about the entire cast of this film, which also includes Marissa Tomei, Paul Giamatti and Evan Rachel Wood. The remaining two featurettes are about the political aspects of the film.