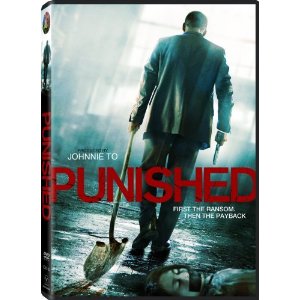 Revenge is a common theme in Chinese action films, and even just in the filmography of producer Johnnie To, who is best known for another film called Vengeance. This one is called Punished, though it is somewhat of an untraditional revenge film. There are more layers of plot and morality than the average revenge film, though it packs just as much excitement.
Punished begins as a rather unpleasant family melodrama. It feels like a Chinese episode of “The Sopranos” when the drug habit of a powerful man (Anthony Wong) becomes more than just an embarrassment. Her behavior threatens business, which somehow feels slightly less than legitimate, but none of this is an issue when the daughter is suddenly kidnapped. The reasons for this kidnapping are unknown, and even after the ransom is paid she is killed just the same.
This is when it becomes a revenge film, though there is a certain level of distance in this vengeance. Instead of dirtying his hands with the act of murdering the people responsible for his daughter’s death, the tycoon hires his ex-bodyguard (Richie Jen) to do it instead. Determined to make enough money to ensure his son’s financial stability in life, this bodyguard is willing to throw everything away in order to destroy the culprits. He videotapes the deaths and sends them back to his boss, who only becomes involved with the final death.
The DVD release includes a featurette about the making of Punished, as well as one about the direction of the cast by Law Wing Cheong (Tactical Unit, Comrades in Arms). There is also a stills gallery from behind-the-scenes.