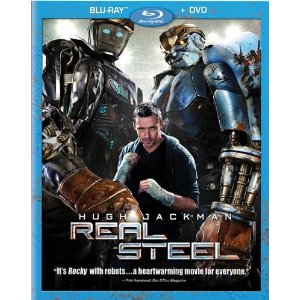 Many critics used Rocky as a comparison for Real Steel, only with robots, but it seems to me that the plot is much closer to resembling another Sylvester Stallone vehicle instead. Over the Top is about a distant father given a cross-country trip to get to know his son better, and Real Steel has a similar scenario between irresponsible father and financially stable son. Only set in the future instead of the 1980s, and with robots instead of the Italian Stallion.
Hugh Jackman stars as Charlie Kenton, a washed up fighter who has turned into a promoter for the robot fights which have replaced humans in the boxing ring. His haphazard and reckless treatment of the robots, along with a strong penchant for making bets he can’t afford, Charlie finds himself deep in financial debt when the added trouble of a custody hearing also comes up. With the death of the boy’s mother, Charlie is the rightful guardian, though he has no relationship with the boy and other wealthy family members are eager to earn custody. Seeing a way to benefit financially from the relationship, Charlie agrees to take his son along with him on a cross-country trip.
After discovering a beat-up training robot perched on a muddy slope over the ravine beside a dump yard, Charlie and his son build a relationship as they build a fighter. Standing at 8-feet, their robot is one of the smallest competitors in the business, relying on the boy’s video game experience and Charlie’s boxing skills and knowledge to win. Against all of the odds, this unlikely trio find themselves on a winning streak that eventually pits them against the world champion robot.
Although we are never asked to believe that their robot named Atom has emotions or is human in anyway, it is certainly clear that he is different from the rest of the robots. There is more expression and humanity within his movements and his face, making him feel like a combination of Wall-E, the robot from The Iron Giant and every great underdog boxer in the history of cinema.
The Blu-ray release of this special effects blockbuster features a spectacular high definition presentation, fully equipped with 7.1 DTS-HD audio for the metal crunching soundtrack. The 2-disc combo pack also includes a DVD version of the film, along with a few special features. There are bloopers, two making-of featurettes and an audio commentary with director Shawn Levy. The Blu-ray disc has these features as well as three exclusive features. There are deleted and extended scenes with an introduction by Levy, a featurette about Charlie’s story before the robots, and an exclusive second-screen feature compatible with iPad.

Great review! I can see the similarities between the two movies, but I think it's about time we came out with a feel good movie about the bonds of father and son! I know that my boyfriend and his son loved the movie!