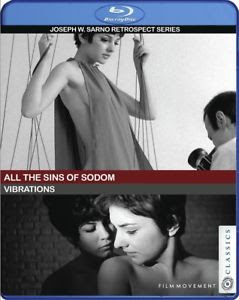 This Blu-ray double-feature release includes two of those three films, made in the same New York City apartment with many of the same cast and crew members, presented with a new 2K digital restoration of each. All the Sins of Sodom follows the sexual exploits of a male photographer named Henning (Dan Machuen) who is in the process of creating a portfolio of work featuring his model, Leslie (Maria Lease), who he also happens to be in a relationship with. This dynamic is complicated by the arrival of another model named Joyce (Sue Akers), who introduces a new dynamic to Henning’s photos and his and Leslie’s love life. Something in Leslie is awakened by Joyce’s touch, which Henning makes sure to capture on camera before the film devolves into a series of orgy sequences.

Vibrations continues the same fascination with taboo lesbian encounters, while adding to it the topic of incest. As the title suggests, Vibrations also centers on the newly marketed sex toy that was also present in All the Sins of Sodom. This time around Maria Lease returns as Barbara Long, a sexually repressed woman who has rented an apartment next to the kinky Georgia Olmstead (Rita Bennett). As curious as she is about the happenings in the apartment next to her, Barbara is too reserved to find out for herself, but the same can not be said of her bold sister, Julia (Marianne Prevost), whose arrival is quickly followed by sexual exploits within the apartment building. Estranged after having an incestuous past with each other, each of the sisters has sexually developed differently as a result. Their reunion brings up those past issues, with the help of Barbara’s neighbor and her vibrator.

Although some of the content in Sarno’s later films would become far more graphic, and Inga itself was an X-rated piece of exploitation, but these low budget sexploitation films are more experimentation in taboo subjects than daring content. There is certainly sex and nudity within the scenes of All the Sins of Sodom and Vibrations, but they are likely to seem tame to today’s audiences. Women are often in various states of undress, but neither film ever has full nudity. What is far more shocking at the time was the female character’s taking control of their own sexuality, whether through lesbian encounters or by creating their own orgasms sans the male contribution. Men still play a part in the proceedings, but there is some clear feminist ideology mixed in with Sarno’s preoccupation with the male gaze.

Each of these two films have been given a new 2K digital restoration, allowing for presentations of remarkable clarity. Even if the other releases of these films weren’t out of print or difficult to find, this release would still be the best version available. On top of the pristine presentation of these influential sexploitation films, the Blu-ray disc also comes with a few extras to go with the double feature. There is a filmed interview with Sarno, as well as commentary track featuring film historian Tim Lucas joined by Peggy Steffans-Sarno. The package also comes with a booklet insert that has liner notes by Tim Lucas alongside cast/crew information and production photos.