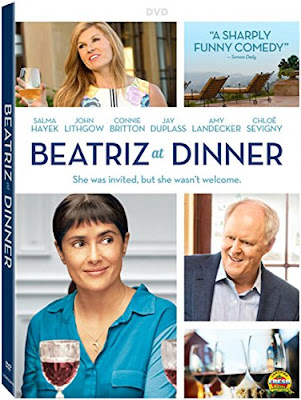 The basic premise for the film is brilliant, even if it begins to feel better suited for a short film once the credits roll. Beatriz (Salma Hayek) is an immigrant from a poor Mexican town who is now living and working in Los Angeles as a spiritual health practitioner. After driving through rush hour traffic to visit a wealthy client, Cathy (Connie Britton), Beatriz has car troubles that prevent her from leaving. Cathy invites Beatriz to stay for a business dinner party that her husband (David Warshofsky) is hosting, oblivious to the conflict this will create.

Beatriz is shown to be so unwavering in her kindness and patience that it is somewhat alarming to see this demeanor fade away as she is confronted with a personality more concerned with selfish gain. The guest of honor at the dinner is a notorious real-estate developer named Doug Strutt (John Lithgow), known more for the controversy brought by his poor treatment of employees and disregard for environmental concerns than what he builds. This reminds Beatriz of a man who built a hotel in her small Mexican hometown, and years of practicing yoga and a peaceful existence are shattered by the encounter. After enduring his casual racism and micro-aggressions for much of the meal, Beatriz suddenly starts to lose her composure.

We spend much of the first half of the movie feeling outraged for Beatriz, though the empathy fades somewhat with her sudden outbursts. Whether it is alcohol, stress, or frustration, Beatriz’s reactions don’t always feel as justified as we might hope. On the flip side, Doug is often presented as somewhat likable, despite some of his outlandish opinions and a general air of superiority to those around him. He is also fairly affable, even when faced with Beatriz’s rage and resentment. At a certain point it becomes clear that Doug represents all that is wrong with the world in Beatriz’s eyes, which is a bit extreme despite his clearly immoral outlook on life. So, in the end, we are left without a clear villain to blame, even if it is clear which of them is justified.

Beatriz at Dinner is directed by Miguel Arteta from a screenplay by Mike White, marking the third time the pair has collaborated together. While the themes have certainly matured since their previous films, the characters don’t feel as fleshed out. Despite the fantastic performances by all involved, there is not enough development to make any clear conclusions about any of the characters, and maybe that is the point. When we are arguing politics with a person at a dinner party, they begin to represent the ideas we resent, even if they are simply the mixed bag of opinions that all humans beings are.