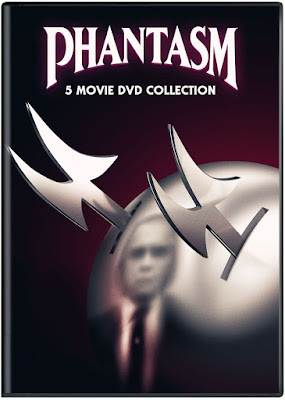 Don Coscarelli’s bizarre vision begins as confusingly as it ends, with the basic story involving a pair of brothers, an ice-cream truck driver, and a mortician that they suspect is responsible for a series of deaths in the small California town. Mike (A. Michael Baldwin) is a 13-year-old worried that his 24-year-old brother (Bill Thornbury), and his official guardian, is considering leaving town without him. These concerns are quickly dispatched after Mike witnesses the town mortician, who he simply calls The Tall Man (Angus Scrimm), lifting a coffin on his own. In an attempt to investigate the strange occurrences at the cemetery, Mike accidentally draws the attention of The Tall Man and his evil minions.

The cemetery is crawling with small creatures cloaked in hooded coats but this is just the beginning of the oddities to be discovered. The Tall Man also has the ability to dispatch spherical weapons, when his finger is dismembered it remains active and alive, and eventually Mike discovers a portal to another world within the walls of the mortuary. This is all presented in a way that makes reality feel dream-like, and by the end of the film I am always left scratching my head and wondering what really occurred within the narrative.

Meticulously restored by J.J. Abrams’ Bad Robot Productions, Phantasm has never looked better, at least not in my lifetime. There is absolutely no static on the image, so that all of the bizarre details can be admired in complete clarity. Occasionally this works as a double-edged sword, showing the faults in the low budget filmmaking as well as the accomplishments. But this is part of the enjoyment of Phantasm; it was filmed economically, with a certain degree of creativity becoming a part of the film’s charms. Special features include interviews from 1979 with writer/director Coscarelli, as well as actor who played the iconic villain, Angus Scrimm. New features include an episode of the television show “Graveyard Carz,” in which they restore a ’71 Pymouth ‘Cuda, the car heavily featured in the film. The audio commentary for the film includes Coscarelli, Baldwin, Scrimm, and Thornbury. There are also a handful of deleted scenes and a trailer gallery.

Phantasm II: The Ball is Back

The first Phantasm film was such a success that the sequel was produced by Universal Studios. It was made for ten times the budget of the first film, and was still the lowest budget horror film that Universal produced in the 1980s. With a studio controlling Coscarelli’s decisions during the filmmaking process, the dream sequences and incoherence of the first film were somewhat lost (to return again in Phantasm IV), and he was also forced to recast the role of Mike, though Michael Baldwin would return in Phantasm III.

Years after the first film, a grown up Mike (James Le Gros) is released from a psychiatric hospital only to continue hunting the Tall Man with Reggie (Reggie Bannister), the ice cream man sidekick from the first film. There are even more deaths and some advanced special effects to enhance the elements of the first film, but it is also a lot more generic. Both Reggie and Mike have love interests, and it has an open-ended conclusion that feels greedy for future sequels. It is an innocuous and divertingly entertaining sequel, but not the direction the franchise was destined to go in.

The bonus features for the second film include another commentary track, this time with Coscarelli, Scrimm, and Bannister. There is also a making-of featurette, deleted scenes, work-print scenes, and a gallery of trailers and TV spots.

Phantasm III: Lord of the Dead

Although it may mostly just be more of the same, and in some ways it is an even more blatant attempt to recapture some of the successful elements of the first film, I tend to like Phantasm III more than any of the other sequels in the franchise. Even though they had distribution established, Phantasm was made independently of a studio, allowing Coscarelli to retain his artistic freedom once again. This meant the return of Baldwin, as well as some of the franchise’s most graphic scenes of violence.

One of the more interesting things about Phantasm III is the number of dangers in the post-apocalyptic world besides The Tall Man. Mike is taken by the iconic villain, leaving Reggie to save him. The only problem is that Reggie keeps getting kidnapped and robbed by random humans. Eventually he comes across a few trustworthy survivors, including a kid named Tim (Kevin Connors) who uses an assortment of grisly traps to kill off intruders in his home. Tim is clearly meant to be a stand-in for the younger Mike in the first film, as well as adding some fresh blood to the franchise. He is joined by Rocky (Gloria Lynne Henry), a nunchaku wielding woman they meet in a mausoleum.

The humor and the camp feel amped up in this second sequel, complete with a zombie car chase that has stunts that remain impressive today. For me, this was a positive end for the franchise, even if Universal only saw fit to release it on video after a limited theatrical release. The special features included on the disc are another commentary track with Coscarelli joined by editor Norman Buckley. There is also a featurette on the legendary stunt performed by Bob Ivy, and a trailer.

Easily the most confusing film since the original, I had no idea what was happening through much of Phantasm IV: Oblivion. It also has the now familiar plot structure, which mostly features Reggie hitting on young women he meets on his journey to find/help Mike. There is creative gore and some beyond surreal sequences, with none of the coherence from the previous two films.

What began as an idea for a TV series, Ravager places Reggie (Reggie Bannister) in the role of protagonist once again, and we join him as he appears back in the desert after coming through a portal from another world. Reggie continues the mission of trying to take down The Tall Man (Angus Scrimm), giving us additional backstory into his existence along the way, but he isn’t the only one battling The Tall Man, and along the way he crosses paths with a group of resistance fighters that include Mike (A. Michael Baldwin. Among the resistance fighters is also a woman named Jane (Dawn Cody), who shares a remarkable resemblance to a woman named Dawn that Reggie encounters along the desert road. This coincidence is as inexplicable as many elements in the film, which often take on a sort of dream logic.

This is the first of the five films not to be directed by Don Coscarelli, though he co-wrote the screenplay alongside director David Hartman. Hartman has most of his experience in animation, which may explain the distinct visual style of his film. Both Coscarelli and Hartman are included in the feature-film commentary track. Additional special features on the Blu-ray include a behind-the-scenes featurette clearly made for promotional purposes (and only five minutes in length), less than two minutes of deleted scenes, and over eight minutes of bloopers and outtakes. There is also a theatrical trailer.