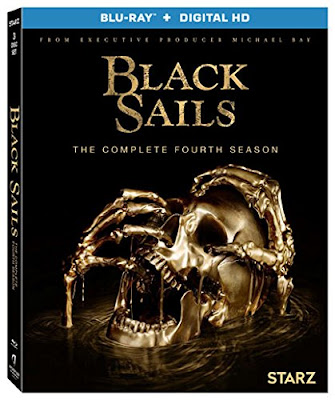 “Black Sails” ultimately bleeds into “Treasure Island,” a fictional work, while adding in new fictional characters and the history of some real-life pirates as well. This complex blend of fact, fiction, and classic literature adds layers of nuance to a show that also holds up as a stand-alone piece of entertainment. While often extremely violent, the series is ultimately driven by the characters. The first few seasons slowly allow us to get to know them more intimately, so that the last couple of seasons are that much more impactful. This final season reduces the excessive sex and nudity that plagued some of the earlier seasons (in what seemed to be a blatant attempt to imitate an exploitative formula that has worked for “Game of Thrones”), but increases much of the brutal pirate violence.

This violence begins from the very first episodes of the season, as the third ended as Captain Flint (Toby Stephens) and Long John Silver (Luke Arnold) saw their ship brought down by a trap while attempting to take back Nassau from the British. The British are led by the ruthless Woodes Rogers (Luke Roberts) and his bride, Nassau’s own backstabbing Eleanor Guthrie (Hannah New). Blackbeard (Ray Stevenson), Rackham (Toby Schmitz), and Anne Bonny (Clara Paget) are able to lure Rogers away, so that Flint and Silver are able to escape, with their lives if not their ship. This opens up Nassau to further invasion and politics, though none are prepared for the brutal measures that Rogers will take in order to win.

It isn’t just the violence from the swashbuckling fight scenes that make this the most brutal season of “Black Sails” yet. In order to garner even more sympathy for the pirate characters we have grown to care about over the first three seasons, the British and Spanish soldiers hunting them are portrayed to be even crueler than the criminals they hunt. A few torture sequences involving fan favorites may push viewers to the same place as “The Walking Dead” did this last season. No character is safe from death, save the ones we know to exist in “Treasure Island.”

The scale of the production for “Black Sails” would be impressive on a big screen, not to mention for a television series. Gone are the model-types cast in Disney’s pirate franchise. These men look as though they have lived years at sea, with excellent costumes and production design to enhance the feeling that you are experiencing all of the gritty details of a pirate’s life. The Blu-ray release of season four comes with two featurettes that go into detail about the efforts made in order to recreate this world as accurately as possible. There are also three roundtables: “Women in Piracy,” “The Legends of Treasure Island,” and “Fearless Fans.” Along with including the season’s ten episodes on three Blu-ray discs, a Digital HD copy is also included with the purchase.