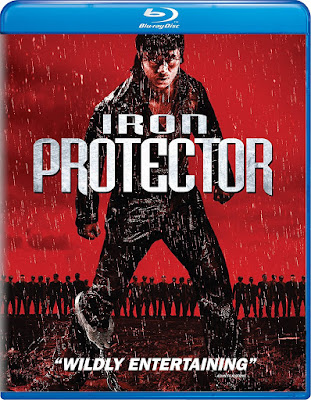 Iron Protector (a.k.a. The Bodyguard or Super Bodyguard) follows rural kung-fu fighter Wu-Lin (Yue Song) as he travels to the big city following the death of his master. Wu-Lin reconnects with a fellow apprentice of the Iron Feet clan, Jiang Li (Shi Yanneng), who left to make his fortune starting a bodyguard company. Li hires Wu-Lin, despite a lingering bitterness that his friend was deemed worthy of being taught the sacred “Way of the 108 Kicks,” while he was not. As a result, Wu-Lin is a better fighter, even with 25lbs weighted boots on each of his feet. Making use of these skills, Li puts Wu-Lin in charge of protecting the daughter of his wealthiest client.

Fei-Fei (Li Yufei) is a spoiled socialite who resents being followed around by the rural bodyguard, whose wardrobe matches his uncultured behavior. This heads down two extremely predictable story arcs; first Wu-Lin’s fighting skills inevitably save Fei-Fei from an attempted kidnapping, and secondly, she falls in love with him despite his uncivilized ways. This romance takes over a large portion of the narrative, meaning to give the protagonist motivation to fight against a large conspiracy of corruption in the final act. Unfortunately, the dialogue and acting between these romantic leads is unbelievable at best, and flat out annoying at its worst. The moment that Fei-Fei suddenly changes her mind and falls for her savior is never earned or convincingly portrayed by the lead actress. It simply feels like filler until the movie has an excuse to get back to the fighting.

The entire film ends up serving as little more than a showcase for Song’s talents, but the problem is that he tries to show abilities in too many titles. Crediting himself as writer/producer/director/choreographer/actor, one can’t help but think that his work would have been more impressive if he had tried to do less. The choreography isn’t bad and his skills often meet the standards to carry the action out, but the direction is sloppy and the writing is beyond terrible. Perhaps the only way that Song could show his worth was by orchestrating a situation where he could display his skills, but he should diminish the number of jobs he takes on in future projects. Simply put, it is hard to know where his talents fall short and where he has merely spread himself too thin in the production process.

The Blu-ray release has a few special features to highlight the elements of the movie that are meant to be most impressive, as well as behind-the-scenes footage played over the credits (in the tradition of Jackie Chan’s stunt/bloopers reels). There is a featurette on the main chase sequence in the film (which features Wu-Lin chasing down a car, even with his 25-lbs boots on), one on the main fight that takes up a majority of the film’s third act, and highlights of the footage from all of the training, stunts and fight choreography that went into the making of the film. The last extra is simply the film’s trailer.