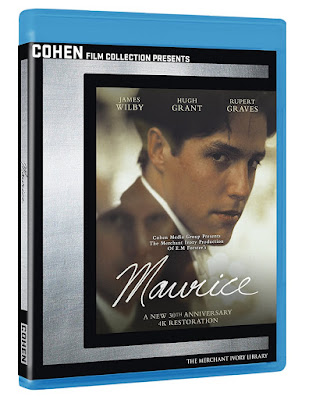 Director James Ivory and producer Ismail Merchant were a distinct filmmaking team best known for their adaptations of E.M. Forster novels. Their first big hit was A Room with a View (1985), and their largest success is often considered to be Howard’s End (1992), but between these two they also adapted Forster’s novel about homosexuality in pre-World War I English society. Maurice may not be as well known as the other Merchant-Ivory Forster adaptations, but it has all of the familiar elements and themes found in their better remembered films. Rich in costumes and production design that accurately depict the times, Maurice also continues the trend of examining the gap between classes, while also adding the themes about sexuality in a society that had deemed homosexuality to be criminal.

Despite a clear criticism of English views on homosexuality, and a storyline that still feels relevant, Maurice was not the first film during this time to tackle the subject. Just a few years earlier, Stephen Frears had released My Beautiful Laundrette, which examined the issue alongside immigration in modern England. The difference with Maurice is the civilized approach, meant to mirror the careful posturing of upper class during this period in England. This is a style that Mechant and Ivory all but perfected in their work together, and despite the narrative dragging in sections, they show this skill with ease in Maurice.

The story follows the sexual awakening of the title character, Maurice Hall (James Wilby), who falls in love with a classmate named Clive Durham (Hugh Grant) while at Cambridge. Despite the threats of imprisonment and constant reminders that these inclinations were “the unspeakable vice of the Greeks,” Maurice and Clive find themselves drawn to each other. When Clive resists this forbidden love and decides to do the respectable thing by marrying a young woman, Maurice is left to grapple with the feelings and what they say about his identity.

Despite his heartbreak, Maurice continues his friendship with Clive, if only to keep up appearances. When visiting his former university lover, Maurice is seduced by one of Clive’s servants, a lower class man named Alec Scudder (Rupert Graves), forcing him to take stock of his own sexuality once and for all. He even tries unsuccessfully to remove these urges with the help of American junk psychologist, Lasker-Jones (Ben Kingsley), who attempts to hypnotize the gay out of Maurice. Ultimately, Maurice must shed his concern for appearance and snobbery in Edwardian society, learning how to let go and love, from a servant of all people.

Honest and accurate as the production of Maurice is in its depiction of the era’s attitudes towards sexuality and class, this still feels like somewhat of a minor entry into the Merchant-Ivory filmography. Part of the problem is the length and meandering pace to the narrative. At 140-minutes, the film often loses focus of its main themes for sub-plots and numerous extraneous supporting characters. Heavy in dialogue, there are entire scenes filled with surface chatter, despite the real story taking place in the silence of actions underneath. While all of the film looks fabulous in its depiction of the period, as all Merchant-Ivory films are known for accomplishing, the story often lacks the same urgency and impressiveness despite three spectacularly dedicated performances from the leading men.

The new 30th Anniversary Blu-ray release of Maurice features a 4K restoration of the film presented in high definition, along with new special features. Due to the length of the film and the number of extras, there is a second disc just for the special features. These include a making-of feature, an additional featurette about the story of Maurice, deleted and alternate takes with optional commentary by Ivory, and a conversation with the filmmakers. New extras include an on-stage Q&A between Ivory and cinematographer Pierre Lhomme, as well as a conversation between Ivory and director Tom McCarthy (Spotlight). There is also a booklet insert included in the package, which has an introduction from Ivory, an interview with Wilby, and an essay on the film by John Pym.