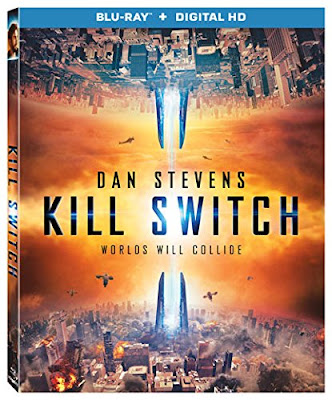 Although complicated by a nonlinear narrative, the plot for Kill Switch is overly simplistic. Set in the future, a physicist has created a copy of our world for the mere purpose of harnessing its energy for Earth’s use. While this experiment seems to work at first, something goes wrong and it threatens to tear our world apart. Will Porter (Dan Stevens) is one of their employees, sent to the alternate world to implement a Redivider box to separate the two universes, destroying one before they destroy each other. This mission is complicated when Will discovers that human life has been duplicated in the alternate world as well, and these copies are not keen on the idea of being destroyed to save the actual world.

Stevens appears in the flashbacks, which are filmed like an ordinary movie, whereas his efforts on the alternate world are all filmed through first-person with only the voice of the actor utilized. All in all, the lead actor has extremely limited screen time, which may disappoint some of the fans merely watching the film because of his involvement. When the short film that Kill Switch is based on was first released on the internet, it resembled a video game so much that many people were fooled into thinking it was a promotional video for Half-Life. Kill Switch seems to wear this honor with pride, using the first-person elements in its action sequences, inevitably giving the impression of watching someone else play a video game, which is not all that enjoyable.

Aside from the obvious flaws in a film resembling a video game without any of the interactive elements which make that medium enjoyable, the action is a bit too sparse and repetitious for Kill Switch to remain engaging, even  with a mere 92-minute run-time. Despite soldiers and flying drones chasing Will down in nearly every scene, there never feels like much at stake. Kill Switch feels like little more than a special effects demo reel, because of its inability to make us care for any of the characters involved. Some of these effects are rather impressive, especially the debris from a world collapsing, but cool visuals are not enough for today’s savvy viewers, who can see this nearly every weekend at the movie theater.

The Blu-ray release of Kill Switch is the best way to watch the film, if only because the best elements are the special effects that are enhanced by the high definition. On the other hand, this shouldn’t be seen as a recommendation to see the film, but merely the format to view it on if it must be watched. The extras include a featurette about the visual effects that the film seems made to display, as well as a commentary track with director Tim Smit. The package also comes with a Digital HD copy of the film.