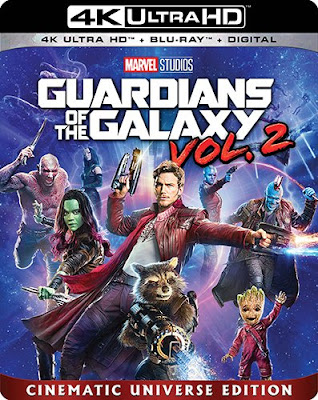 This is not to say that the second Guardians of the Galaxy film is bad, but it is also rarely more than diverting escapism with cutting edge visual effects. At the very least, these visuals make for an impressive presentation on 4K Ultra HD, even when the story and screenplay fail to impress. Essentially all this installment of the franchise is concerned with is the background for the mysterious father of Peter Quill (Chris Pratt). After a brief opening with the Guardians on a mission, their ship is destroyed, and they spend the remainder of the movie on a planet named Ego (Kurt Russell), which also happens to be Quill’s father.

The plot is overly simplistic, but the characters don’t really do a whole lot to develop either. Instead, much of this film just feels like an excuse for displaying the visual effects, which are more of a star than anyone in the cast. There are small character-focused sub-plots, but they are fairly contrived and predictable. The relationship (or lack thereof) between Quill and Gamora (Zoe Saldana) is dragged out even more, without any resolution. Rocket (voiced by Bradley Cooper) continues to push people away with his selfish ways, while Drax (Dave Bautista) and Baby Groot (somewhere in there is the altered voice of Vin Diesel saying three words the entire film) merely provide comedic relief and a cuteness factor.

The primary theme of this film is family, and it gets pounded into the narrative several unsubtle ways. Aside from the obvious focus on Quill’s relationship with his biological father, Yondu (Michael Rooker) returns to prove himself more of a father figure than the original film alluded to. Gamara also deals with difficult family issues as her sister (Karen Gillian) sets out on a mission murder her. And the entire Guardians team represents a surrogate family, which is reminded to us several times throughout the film in borderline cheesy dialogue.

While literally nothing about the plot or screenplay left me impressed, the visuals of this film are undeniably incredible. Once you have accepted the fact that films like this are made without a single shot being free from CGI and green screens (despite director James Gunn comparing this to an independent film in the introduction video included), there is plenty of eye candy to enjoy. It is a colorful and immersive experience, enhanced by the 4K presentation as well as any release that I have seen. In some ways, this presentation was as impressive as seeing the film on a big screen. The wide color spectrum is the clear highlight of the 4K disc, though the immersive audio with multidimensional sound is also well utilized within the numerous action sequences. There are so many scenes of action and sci-fi spectacle that it is hard to imagine a recent film that makes better use of the format.

Along with the 4K disc, this package comes with a Blu-ray copy and a code for a Digital copy to be downloaded. Considering the massive popularity of this movie and this package being referred to as the “Cinematic Universe Edition,” the special features are surprisingly sparse. There are less than a handful of deleted/extended scenes, a gag reel, and a music video that was released online in anticipation of the home entertainment release. The video features much of the supporting cast (and David Hasselhoff) in a fabricated ‘70s-style disco music video, with a badly green screened shot of Pratt at the very end, implying he participated despite clearly never being in the same studio where a majority of the footage was filmed. The highlight of the extras comes in the form of a commentary track with Gunn, who is informative while occasionally having an inflated opinion of his own work. There is also a four-part making-of featurette, which shows just how much of the film was created in post-production.

nice post!Please visit my blog to refer to the methods of learning English for children.