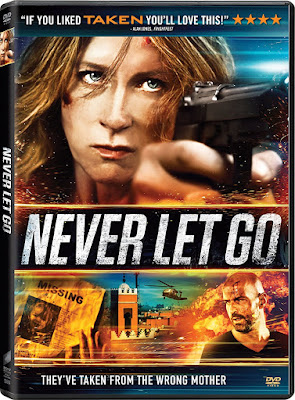 The premise is almost as simple as Kidnap, although even the set-up feels contrived. Single mother Lisa Brennan (Angela Dixon) inexplicably takes her newborn baby to Morocco, where the father is supposed to meet her. The problem from the very beginning is the trouble liking Lisa, who we soon discover had the baby with a politician named Clark Anderson (Nigel Whitmey), who has a pregnant wife and a career endangered by his second family. Perhaps this is why Lisa is on vacation with her infant, though it never gives reason for her dangerous choice of location. Suspicious of even the friendliest locals, it is surprising that Lisa is caught off guard long enough for her baby to be stolen, but that is what inevitably happens.

Lisa immediately springs into action, quickly killing a man that is simply carrying a melon in the bag she believes has her child. The film quickly glosses over the fact that a man that might be innocent is killed by our so-called hero, as her erratic behavior is seen as a normal reaction from a protective parent. When the police justifiably try to stop Lisa for the murder, she fights back against them also. In one of the film’s most absurd early sequences, Lisa takes out a handful of cops that all have guns drawn on her. It is unclear how this happens, because the scene is shot in close-ups of her face rather than actually choreographing any type of realistic fighting. Dixon is unable to convince us that she would be capable of these extraordinary feats, despite the film’s faulty reasoning that it is possible in the same way that a mother might lift a car to save her child.

Armed with a gun stolen from the police, Lisa goes on to injure several other innocent people on her mission to find the people that have kidnapped her baby, even shooting a café owner simply because he won’t let her use his telephone. But none of this is addressed, and it is even implied that all of these crimes will be forgotten once the police discover that her child really was stolen. Before we get to that ridiculous resolution, however, we must spend most of the film’s laborious 94-minute run-time watching Lisa shrilly panic in a way that somehow miraculously leads her to the villains.

The path of destruction that this white woman leaves in her wake in her entitled mission to get her child back is only overshadowed by the relentless depiction of men as evil. The women characters that Lisa comes across inevitably believe and her in the cause, while men are nearly all incompetent and villainous. This is further solidified in a twist ending that everyone with half a brain should see coming within the first 20-minutes. And this resolution comes with the rescue of another child, one whose parents have been trying to find for months, despite the initial premise and understanding of Lisa’s panic relying on the importance of finding a child within hours of the abduction. As long as we get a shoddy final scene of a toddler walking towards two actors he clearly knows are not his actual parents. This movie isn’t just bad; it’s painful.

The DVD release has no special features, which is fitting, as there is nothing special about this film beyond the level of incompetence across every aspect of the production.