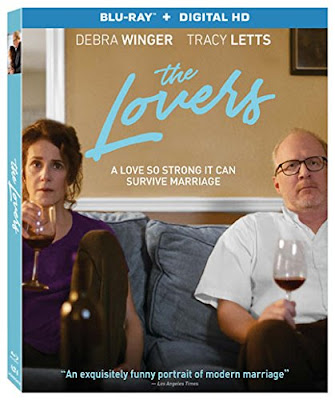 From the opening scenes in the film, the title of the film becomes instantly clear, though its meaning will open up over the course of the film. Before we even see a scene with married couple Michael (Letts) and Mary (Winger) together, we are given dual scenes of them interacting with their secret lovers. Mary sneaks out of her office building to have a conversation with Robert (Aidan Gillen) about her intentions to leave Michael for him, while Michael has a similar post-coital discussion with his hysterical girlfriend, Lucy (Melora Walters). When Mary and Michael finally do interact, it is mostly with causal lies and routine patterns of secret texts and phone calls. Ironically, much of their efforts to hide their own affair are unnecessary, as the other person is too preoccupied with their own extramarital activities to notice the other person’s behavior.

The film takes a turn when Michael and Mary, presumably frustrated with the constant nagging from their secret lovers, are drawn back to each other. With expectations long vanished, they find in each other the freedom of obligation that presumably attracted them to have an affair in the first place. The only problem is that they have a commitment to their lovers, and must keep secret their affair in wedlock from those they are secretly committed to outside of the marriage. This could easily turn into a comedy of errors, but Jacobs is much more interested in the comedy coming from the complicated hypocrisy of the characters than in any contrived scenario. And in allowing the characters to take the forefront, he also gives them enough depth so that their flaws don’t define them.

Somehow even while making these characters feel real, there is little at stake when they betray each other. The narrative remains farcical, never asking us to feel empathetic of them in their duplicity. The one exception involves a climactic section in the third act, when Mary and Michael’s son returns home for a visit. Joel (Tyler Ross) brings his new girlfriend, Erin (Jessica Sula), unaware that he is walking into a home full of mixed signals. Having grown up watching them fight, it is the sight of Michael and Mary getting along that is most disorienting for Joel. Although much of the film remains detached from emotions, Joel’s involvement in their complicated relationship highlights the selfishness of the couple, perhaps more than Jacobs intended.

The Blu-ray release of The Lovers also comes with a Digital HD copy of the film, along with the special features on the disc. These extras include two featurettes and a filmmaker’s audio commentary with Jacobs. The first featurette is a generic promotional making-of, with the usual interviews praising the experience making the movie, while the other focuses more specifically on the musical score created for the film.