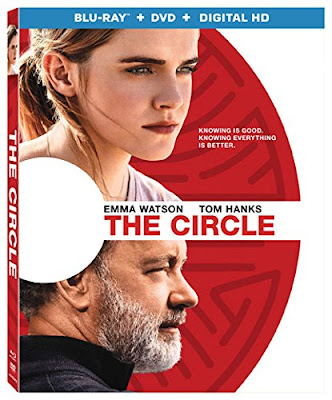 Presumably set in the near future, the film follows a young woman’s journey into a powerful tech company that threatens to become even more of a monopoly as it develops new ideas that threaten basic privacy. But Mae (Emma Watson) is mostly just happy to have landed a job with a healthy paycheck and benefits she can use to help her ailing father (Bill Paxton). When the company begins to intrude on her privacy, Mae is still hesitant to accept that there is something wrong with the company. Even when the friend (Karen Gillan) that got her the job is on the verge of breakdown and the man responsible for most of the tech developments (John Boyega) gives her a tour of the company’s dangerous plans to abuse his inventions, Mae stays loyal to the company, for unexplained reasons.

The film goes to great lengths to show how thoughtful and intelligent Mae is in the opening scenes, only to spend a majority of the film watching her take forever to come to the same conclusion as the audience and nearly every character around her. And that only happens by putting Mae through the most manipulative of melodramatic sequences. Some credit for Mae’s gullibility must be given to the charm of The Circle’s founder, Bailey (Tom Hanks). Hanks utilizes his natural charm, as he often does, but this time in service of a character with the sincerity of a salesman. Bailey knows he is likeable, and uses that as a tool to get people to do what he wants.

Even though the company presumably employs an unfathomable number on their expansive campus, Bailey takes a shine to newcomer Mae, perhaps in seeing the potential to exploit her. After a brief period working at the company, Mae becomes an icon by volunteering to give up all privacy and allowing herself to be filmed at all times. This evolves from the simple plan to use a website to gather information about consumers, a controversial practice that occurs online today, and it is clear what near future dangers Eggers and Ponsoldt are hinting at. The problem is that they remain far too passive in commenting on this practice, especially considering how willing they are to stray into melodramatic territory for the film’s conclusion.

Even without a strong message or clear genre to exist in, it seems that the casting of The Circle was meant to bring in an audience from the fanbase alone. Tom Hanks playing against type (at least under the surface) is a worthwhile reason to endure some of the shakier elements in the film, but this is far from Watson’s strongest work. Often her efforts to imitate a buoyant American accent make her character feel somewhat contrived, and it is never clear if that is something her character is doing intentionally while under observation or just a bit of overacting on Watson’s part. And those who watch this film simply to see Boyega in a film outside of the Star Wars universe are likely to be let down, as his participation is little more than that of a cameo. In the end, the movie feels as constructed by false veneers used for advertising as the company it condemns.

The Blu-ray release for The Circle comes with a DVD and a Digital HD copy of the film. Even without the action sequences, Ponsoldt makes use of creative use of his visual style to convey the mass of online followers Mae has. This may not make the film any more exciting, but it does enhance the high definition viewing experience. The extras on the actual discs include a four-part making-of featurette, as well as a featurette about the advancements in technology that the film is commenting on, and a memoriam featurette for Paxton, who passed away shortly after making this movie.