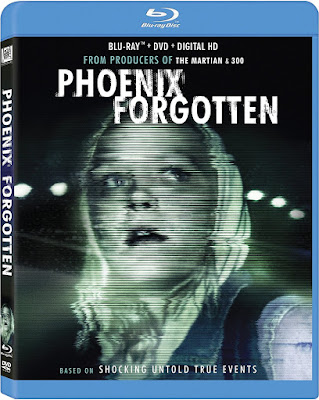 While The Blair Witch Project may have fabricated a myth in order to fake a documentary, Phoenix Forgotten begins with actual events before manufacturing a storyline from it. In 1997 there were a series of lights seen by thousands in the sky in Phoeniz, Arizona. This phenomenon, now referred to as the ‘Phoenix Lights,’ is considered to be the largest possible UFO sighting of all time, with local law enforcement even forced to make a statement on it. Phoenix Forgotten creates a mystery involving three teenagers who went missing shortly after going into the desert to try and catch these lights on tape.

The leader of these teens is aspiring filmmaker Josh Bishop (Luke Spencer Roberts), who pairs up with a pretty classmate named Ashley (Chelsea Lopez) either because of her interest in journalism or his interest in her. They interview everyone they can before coming up with the brilliant idea of trying to film in an area they predict the spaceships will show up in next. In order to take this trip into the desert, Josh enlists the help of his friend Mark (Justin Matthews) so that they can use his car, and unwittingly creates a love triangle between him and Ashley.

Although a majority of the film is simply the footage gathered from evidence in the case to find the missing teens, the movie is book-ended by an amateur investigation done by Josh’s grown younger sister. Sophie (Florence Hartigan) traces her brother’s steps, interviewing her parents and others about his disappearance, conveniently followed by a boyfriend filming it all for his own documentary. Although Sophie’s questions provide some necessary background for the events captured by Josh’s camera, her storyline provides little else to the film. The excitement all takes place in the late 1990s footage, distancing the danger from the modern storyline with Sophie. There isn’t even an effort to resolve Sophie’s investigation once we are shown the footage she recovers in the lost tape from Josh’s expedition, proving her singular purpose in the narrative.

Phoenix Forgotten accomplishes what it sets out to do, ultimately giving audiences a shaky-cam idea of what an actual alien encounter might look like on film. The first half of the film is even effective in resembling an actual documentary, even using some real news footage from the coverage of the real events. Neither the imitation of an actual documentary or the thrills are entirely effective on their own, but the balancing game is sufficient enough to leave both from feeling like complete failures or successes.

Seeing as much of this movie was recorded on VHS in order to create the video camera feel of actual home video, I can’t imagine it makes much difference whether Phoenix Forgotten is seen on Blu-ray or DVD, though both are included, as is a Digital HD copy of the movie. I saw an early copy of The Blair Witch Project on VHS and it’s still the most frightening film experience I’ve had to date, so the picture clarity is not always everything for found footage. The one area greatly enhanced by the technology is the sound, which is easily more frightening than anything seen, as was also the case with Blair Witch.

The extras on the disc include a commentary track and two promotional featurettes. The commentary includes director Justin Barber and actors Florence Hartigan, Chelsea Lopez, and Justin Matthews.