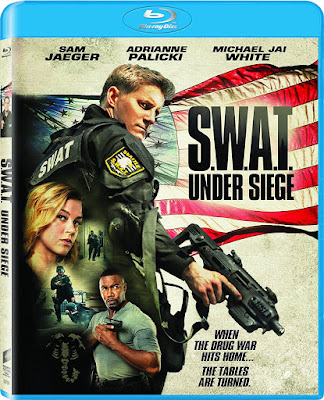 Although there are no returning characters from the past films, this still manages to feel like a S.W.A.T. film thanks to a number of expected plot devices recycled from the original, including a dirty cop hiding among the team. The basic premise for the film borrows from other action movie plots instead, however. It is essentially just Assault on Precinct 13 set in the S.W.A.T. film universe, with a compound coming under siege by a group of hired militia. The attackers are after a man known as ‘The Scorpion’ (Michael Jai White), who is apprehended by during a raid on the drug cartel that results in a death of one of the team members. Heading up the team that led this mission is Travis Hall (Sam Jaeger) and he becomes dedicated to finding out why they were holding ‘The Scorpion’ prisoner.

Before Travis can get any answers, their compound is surrounded by men and firepower that vastly surpasses their own. Headed up by an internationally known terrorist, they refuse to leave without ‘The Scorpion,’ who is in possession of something valuable nobody can find. Even with the building’s lockdown security measures, Travis knows it is only a matter of time before they break in, especially when ‘The Scorpion’ warns him that there is a mole amongst the S.W.A.T. members.

The plot is pedestrian, but that isn’t what fails the movie. Look at a similar simplistic storyline in The Raid: Redemption and you will see that story alone is not enough to sink a film of this type. The action genre must have good action, above all else, and S.W.A.T.: Under Siege is full of poorly shot scenes that are primarily reliant on CGI muzzle flashes and bullet ricochets. Even with Michael Jai White in the film, the fight choreography is sparse and unimpressive, and the martial arts actor is not at his best. Despite having a lot of heavy firepower in the film and a few creative scenes of action battle, much is lost through the unconvincing use of digital effects rather than proper stunt work and practical effects. Or at least better digital effects.

The Blu-ray release comes with no special features and no additional copies of the movie. The only reason to buy the Blu-ray is the high definition presentation, which does not necessarily improve upon the over-lit sets and stodgy special effects. I can’t imagine it made the film much worse, but it certainly didn’t help any.