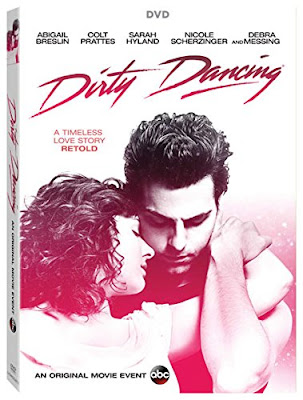 Dirty Dancing is a film which has had lasting success, despite being of questionable quality. It is the type of film that has a dedicated fanbase willing to ignore any critical shortcomings, and we have seen this taken advantage of with countless anniversary releases, a sequel (by name only), a stage version, and now an ABC original TV movie adaptation of the original. Wholly unnecessary, horrendously miscast, and torturously overlong, fans of the original were quick to denounce this remake when it aired on television just over a month ago. Rather than extending the embarrassment any longer than necessary, the film has quickly been released on DVD for suckers mistaking the similar cover art for the original campy cult classic.

The classic story involves the coming-of-age story set in the summer of 1963 at a Catskills resort visited by Frances “Baby” Houseman (Abigail Breslin), her older sister (Sarah Hyland), and her parents (Bruce Greenwood and Debra Messing). The nickname Baby is telling, as our protagonist starts the film as a fairly naïve (albeit book smart) teenage on her way to college. During this final summer vacation with her family, Baby learns independence by finding a hidden talent for dancing, which is really just born out of her lust for the resort dance teacher, Johnny Castle (Colt Prattes). All of the familiar elements of the story are present, though there are many unnecessary ones also added.

I don’t know if it is a reaction to the stage adaptation of the film, but this TV movie inexplicably turns Dirty Dancing into a full-on musical, complete with a number of newly added songs. Some of this seems to be a way for the film to incorporate more material for the ensemble cast of name actors, even when it detracts from the main storyline. Hyland, Messing, Houseman, and Katey Sagal are each given their own moment in the spotlight, despite the film clearly being narrated by Baby, who isn’t even present in many of these moments. As if it were not enough to add in unnecessary musical numbers, the film also inserts additional drama with marital problems between Baby’s parents and an underdeveloped interracial relationship between Baby’s sister and one of the resort’s band members. None of this is likely to be as irritating to fans as the film’s added epilogue, jumping decades forward in the story to show a stage version of Dirty Dancing and resolution to the film’s central relationship.

The story may have been added to in ways that frustrated fans, but not nearly as much as the material which was kept exactly the same. The reason this is even more upsetting is the ease with which it is compared to the original, starting with the casting. Let’s be clear; nobody was going to live up to the performance from Patrick Swayze, but Colt Prattes doesn’t come close in any regard. Though an adequate dancer, Prattes lacks the charisma that the Swayze filled the role with. Even worse than Prattes is Breslin, who is never convincing as a dancer and seems to be losing all subtlety as an actress with age. As poorly as these two fill their roles, it is only made worse by the fact that they have absolutely no chemistry together. Not for a moment is the romance between them believable, and it somehow compounds the creepier elements of their relationship from the original film.

In the end, this Dirty Dancing remake is only good for those who have never seen the original film. And even those people would be better off finding the original on TV or streaming services rather than watch this pointless remake. The DVD includes two featurettes, focusing on the dancing and the decision to adapt the original. They are self-praising promotional featurettes, about as unneeded as the film itself.