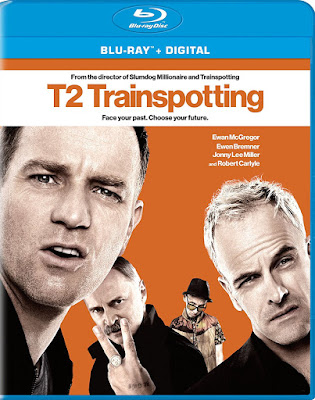 First and foremost, Boyle has made a movie for fans of the original. While the story in the sequel certainly stands up as a standalone film, much of the joy comes from subtle (and not-so-subtle) references to the original, almost like hearing inside jokes from friends after a lengthy period apart. The first film ended with Mark Renton (Ewan McGregor) leaving Scotland after robbing his friends of the money they stole together in a heist, so it is only fitting that the sequel deal with his return. Each of the Renton’s three friends has different reactions to his reappearance, with various degrees of pent up anger from the betrayal. The only one that seems to hold no resentment is Spud (Ewen Bremner), who is also the one still struggling the most with the drug habits from their past. Sick Boy (Jonny Lee Miller) gives him a beating before forgiving him, whereas Begbie seems determined to kill his former friend.

While there is still some of the drug addiction that preoccupied much of the original film, the perspective has changed a great deal. Renton remains sober, though this does not necessarily make him any more mature or less selfish, and Sick Boy may not use heroin any longer, but he puts as much cocaine as he can buy up his nose. Spud is the one who struggles the most with drug addiction, but he is also the character who develops the most over the course of the film, learning to channel his addiction to substances into a healthier creative outlet after losing his family along with their respect. Begbie’s drug of choice was always violence, and that has changed none, even after spending the 20 years behind bars.

Even if the drug aspects take backseat in this sequel, this just allows the other elements to take center stage, including a series of daft money-making schemes. At the forefront is Sick Boy’s plan to open a brothel with the help of his Bulgarian girlfriend, Veronika (Anjela Nedyalkova), who he seems to have met while she was working as a prostitute. The pair have been blackmailing wealthy businessmen in order to raise money for the project, though the arrival of Renton increases the creativity of their money-making scams. It doesn’t take Renton long to slip back into his old immoral ways, even if he has matured from his drug habits.

There are many strands in the narrative, but the plot is more episodic rather than containing any storylines that have true resolution. This is more about the characters and how they have developed rather than whether or not Begbie will get his revenge or if the brothel will ever actually open. By making it about the characters, Boyle slows down the pacing of the narrative, despite a few signature sequences of chase scenes and unexpected violence. Even if these characters don’t seem to have matured much in the 20 years since the last film, Boyle has as a filmmaker. In many ways, this film feels like a stylistic and thematic bridge between his past and current filmography. Even if it will never reach the level of success that the first film saw, T2 is a welcome addition into the accomplished filmmaker’s body of work.

The Blu-ray release of T2 comes with a digital copy, but no DVD. The special features on the disc a fairly limited, though each of them is worthwhile for fans of the franchise. While not all of the deleted scenes are necessary, they do give more material for those who have been waiting 20 years for a sequel. There is also a featurette with a conversation between Boyle and the cast about the process of bringing the characters back after 20 years, not to mention a spectacular commentary track with Boyle and writer Jon Hodge, who loosely adapted the screenplay from the Irvine Welsh novels.