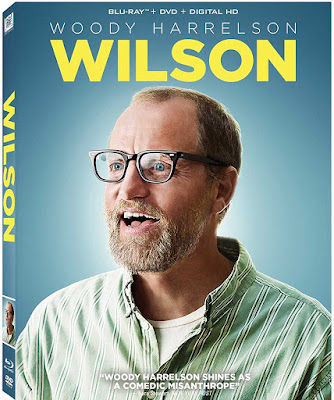 Harrelson’s Wilson is a middle-aged neurotically unfiltered man who bounces back-and-forth between bitterness for where he has ended up in life and a surprising childlike wonder for the simple pleasures of human contact. The contradiction of Wilson is that he is cynical and morbid while simultaneously capable of finding joy in the simplest of pleasures, in a way that can often only be described as misguided optimism. This incongruity in character carries through in his actions, because despite being a recluse, Wilson is often the one reaching out to those around him.

After seeing him try and connect (often unsuccessfully) with anyone he comes across in his daily life, Wilson makes an effort to find his troubled ex-wife, Pippi (Laura Dern). Having disappeared on him over seventeen years earlier, Pippi is just starting to get her life back together after a long period of drug addiction and other questionable choices. Wilson is under the impression that Pippi had gotten an abortion shortly after leaving him, but she informs him that their child was adopted instead. This leads Wilson on a misguided attempt to reunite the family he never had by tracking down their biological daughter, Claire (Isabella Amara).

Although based on Daniel Clowes’ graphic novel, who also adapted the screenplay, Wilson suffers many of the same problems as director Craig Johnson’s previous film, The Skeleton Twins. While the narratives provide showcases for the actors to play unconventional roles, there is a lack of focus and tonal imbalance in trying to figure out what to do with the flawed characters. Even with a familiar set-up in the plot, Wilson often feels episodic rather than committing to an examination of a singular scenario, jumping the story forward whenever the screenplay gets stuck. Even though Harrelson impresses in the role, his work often feels wasted in a movie that never matches his uniqueness.

The Blu-ray release for Wilson comes with a DVD and Digital HD copy of the film, which is competently made without ever really needing the extra benefits brought by high definition presentation. The discs themselves also come with special features, which include a few featurettes, deleted scenes, and a photo gallery from the production. All three of the featurettes are brief promotional videos, less than two-minutes in length. “Who is Wilson?” dives into the title character, while “The Women of Wilson” looks at the various female characters that share his universe, and “Strip to Screen” briefly examines the effort to adapt Clowes’ cult work.