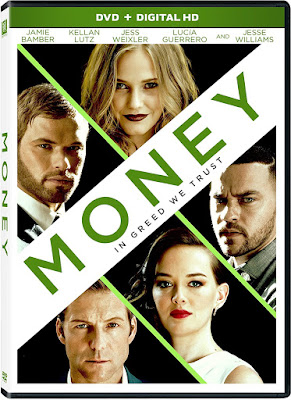 Set over the course of one evening, Money essentially has five characters, with one supporting player that has been obviously planted in the screenplay to help provide a final twist that can be seen long before it arrives. Mark (Kellan Lutz) and Sylvia (Jess Weiler) are a wealthy young couple hosting a dinner for Mark’s co-worker, Sean (Jesse Williams), and his new girlfriend, Christina (Lucía Guerrero), when a stranger arrives at the door. John (Jamie Bamber) introduces himself as their new neighbor, but once invited inside, the two couples discover that he is actually a criminal with inside information about the illegal selling of trade secrets that have recently landed Mark and Sean a major payday.

What follows is a typical cat-and-mouse game, with the power shifting back and forth between the intruder and the pair of white collar criminals he is attempting to rob. There are no moral characters among these five, which can make for a difficult viewing. All are so blinded by greed that it often feels as though John may be the most likeable, despite also being the most violent. And it certainly doesn’t help that most of the actors add zero depth to their characters, speaking each line with an absence of nuance that just comes off as bad acting on top of poor writing. It might not even be that John is more likable, but simply that Bamber is the actor most capable of handling the flat material.

From the very beginning when we find out that Lutz and Williams are playing scientists, the casting feels horribly off. Lutz is best known for his brief appearances in the Twilight franchise, and has made a career off of that fame ever since. Nothing in his demeanor or delivery of lines makes him even remotely believable as a scientist, or any kind of a professional capable of making money. And while Williams fares slightly better as an actor, the fact that his character is written as a cocaine addict with a quick temper makes the writing more suspect instead.

And the writing is often worthy of an eye-roll or two. In one sequence, shortly after turning the tables on their intruder for the first time, Sylvia inexplicably turns to Christina and compliments her on the quality of her skin. Why is this a concern when a violent criminal has just brought a gun into the house? I have no idea what this line was included for, but Weixler is far from capable enough to make it work, leading to questions about both the talent of the writer and the actor. Weixler is easily one of the more painful elements in this film, which is saying a lot for a movie trying to convince us that Lutz is a scientist. Each of these actors feel cast for their past work rather than their ability to handle the material, and the thinly developed screenplay often suffers as a result. Even Guerrero, whose face and name might not be as instantly recognizable, was clearly cast as a result of this being a co-production with Spain, where she is much better known.

A film about greed is likely to have distasteful characters, but there is nobody for the audience to root for as a result. It is a bad sign when the most likeable character is a violent thief. Having an attractive and slightly famous cast might have seemed the right choice for a successful film, but it also resulted in a mediocre movie where a good one may have been possible with actors and dialogue that have a bit more subtlety and depth. The DVD special features include a behind-the-scenes featurette and a digital HD copy of the movie.