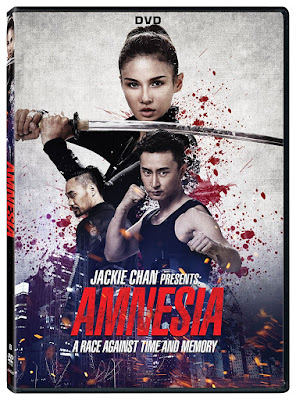 Jackie Chan Presents: Amnesia is a film for anyone who ever wondered what would happen if you combined the narratives of Premium Rush with Memento and set it in the comedic martial arts world of a Jackie Chan film. If this sounds convoluted and strange (as well as being a comparison that only someone who watches too many movies would make), my description was fitting. Despite the originality of this blended premise, there is a familiarity in the tone and many of the action sequences in the narrative that manage to make this feel like just another mediocre martial arts movie. Part of the problem is that this Jackie Chan-produced movie has a lead actor without even a fraction of the producer’s charisma. It doesn’t exactly help that we (meaning myself and others that watch too many movies) have also already seen Chan in a similar memory-loss action film, Who Am I? (1998).

Although originally titled Who Am I 2015 and planned as a remake of Chan’s 1998 film about a secret agent losing his memory, the title was wisely changed to avoid this confusion. For one thing, the main character in Amnesia is not a secret agent, as he was in the 1998 film, which also removes the obvious comparison to the Jason Bourne franchise. Instead, our protagonist is simply a bike courier named Li Ziwei (Wang Haixiang), given a package to deliver which contains important evidence against a local criminal. When our unassuming hero witnesses the murder of a businessman who sent the package, he is chased down by the henchmen both for what he saw and the evidence that he carries.

This initial chase ends with an accident (shown in freeze-frame over the opening credits in a way that was suspiciously close to the opening used for Deadpool a year after this film), leaving our protagonist with a debilitating head injury. Here is where the title and comparison to Chan’s past film diverge from the actual plot, because our hero suffers from prosopagnosia (face blindness) rather than amnesia. He has no trouble remembering what happened, but cannot recognize anybody that he knows by their face.

This obviously makes him an unreliable witness for the murder, but this does not stop the criminal lackeys from targeting him. Framed for the murder he witnessed, Li is chased by both criminals and cops. His only chance for navigating the sea of unfamiliar faces comes in the form of an annoying hitchhiker (Yao Xingtong) he picks up along the way. This leads to a bit of obligatory romance, which is never really earned in chemistry between the characters, despite the forced sentimentality the filmmakers place on their relationship. The movie only occasionally thrives in the type of slapstick-inspired action sequences that Chan would have excelled at, with Wang exhibiting a fraction of the same magic.