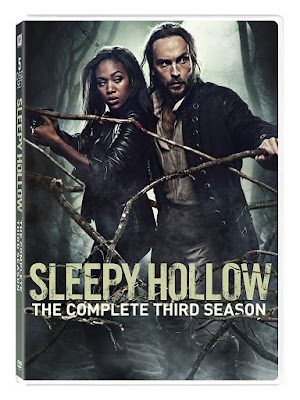 The show primarily follows Ichabod Crane (Tom Mison), who has been resurrected after the arrival of the headless horseman in modern times. Forced to learn the ways of modern society though he was last alive during the American Civil War, Crane is paired up with Police Lt. Abbie Mills (Nicole Beharie), though that dynamic shifts over the course of the third season. This allows the show to also follow a familiar police procedural format, simply adding supernatural elements the same way that nearly all of the superhero shows (“Arrow,” “The Flash,” “Supergirl”) are formatted. They take one character with special powers and pair them with a law enforcement agent, yet Crane’s only superpower is an accurate perspective on historical events.

If the ‘freak-of-the-week’ formula quickly becomes dull and rarely advances the plot, there is at least some innovation in the third season with an unexpected cross-over storyline with the show “Bones.” At the very least, this returns some of the science to the series momentarily, though it makes less sense without the inclusion of the “Bones” episode which started the two-part narrative. While the first season was about the supernatural intruding on the real world, by this season they rarely address the fact that a majority of the population is completely unaware that this supernatural war is taking place. Logic is thrown out the window, and the characters have become tedious with no real advancement in the plot. And even though it was unexpected to have these two shows enter each other’s universe, this is just another way that Fox seems to be imitating the CW superhero shows.

If you enjoy shows that are all about magic and mysticism, “Sleepy Hollow” may still carry some charms, though it no longer resembles anything close to the source material. Occasionally there are episodes with a creative monster for them to battle, but the charms of Crane in a different time period have passed along with any successful elements of horror. This is a fantasy series now, through and through, and only fans of that genre are likely to remain interested in where the story is going next. And even fans of the show may be disappointed by the recent cast changes, enough so that it could hurt the support shown for the upcoming fourth season.

The DVD release for season three contains all 18 episodes in a 5-disc set. The special features include a handful of deleted scenes and a gag reel. Season four premieres on January 6th on Fox.