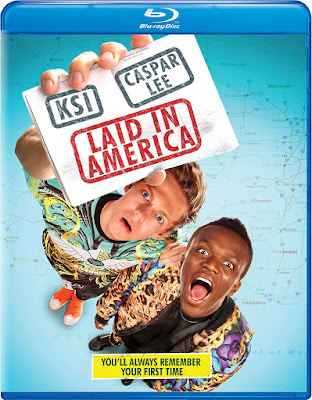 Remove the novelty of untalented internet personalities and Laid in America just resembles any number of better sex comedies. Foreign exchange students Duncan (KSI) and Jack (Caspar Lee) have only one night left in America before returning to their home countries, and they intend to spend it getting laid. As this is a teenage sex comedy, their efforts predictably involve a party that they aren’t invited to and a girl who should be unobtainable to both of these morons. So much of this movie resembles Superbad. The major difference is that the two geeks try and obtain a woman to bring to the party as admission price, in a misogynistic shift from the alcohol obtained by the teens in Superbad.

The simple task of trying to party becomes an all-night adventure that devolves into an asinine adventure of mishaps involving drug dealers and demeaning depictions of women. I understand that this movie is meant for the type of unintelligent viewer that regularly views YouTube as a valid source of entertainment, so standards have been severely lowered, but there is virtually nothing redeeming about this film. Not only is the quality of filmmaking relentlessly sub-par, it is tainted with a misogynistic treatment of women, making them little more than props to the horny teens. This movie is so sexist in its portrayal of women that it actually makes American Pie look feminist.

I could go on to discuss the use of racial stereotypes, rant about the blandness of the characters, and complain about how forgettable it all is. I’d rather not waste any more time and energy on these untalented hacks and the poor excuse to cash in on their fleeting popularity. There isn’t a single artistic contribution to come from the fame-hungry hacks on YouTube, and Laid in America is yet another piece of evidence to this effect.

The Blu-ray special features include a making-of documentary that may be even more annoying than the film itself.