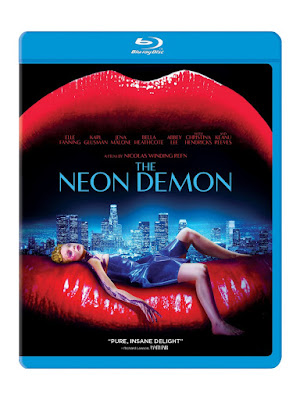 Like The Shining, The Neon Demon is a horror movie about mood and atmosphere, only containing brief moments of the supernatural and far less violence than one might expect from the genre. While the cheap thrills of horror films have been all but removed, save a few grindhouse exploitation moments near the end, Refn adds in layers of depth one would expect from an art film. The film is rich with possible metaphors and masterful technical achievements, though it also comes with a level of ambiguity that casual filmgoers may find frustrating. For someone who has dedicated their life to watching movies, as I have, Refn is a godsend. Even if I was slightly unsure of how I felt about The Neon Demon when I left the theater, it was a film that stayed on my mind for weeks afterwards. And with each day of obsessive recollection and analysis, my appreciation of the film only grew.

I’ve purposefully explained the mood of this movie before giving the perfunctory synopsis, mostly because I find the level of importance to be switched from the expectation of most movies. Knowing the plot of a Refn film can almost be a handicap, because it allows audiences to imagine the film that mainstream Hollywood might make with the same premise. This was why some were disappointed with Drive, a film about a getaway driver which only had two car chase sequences. To say that The Neon Demon is a film about the modeling side of the fashion industry may not be enough. It is far more apt to say that this is a film about predators, with a protagonist that appears to be the most appealing prey in the wilderness of Los Angeles.

Elle Fanning carries the film as Jesse, a character that we follow closely without ever really understanding. Jesse is a young teenager who has suddenly arrived in L.A. with the hopes of becoming a high-fashion model. Despite being underage, an unscrupulous agent (Christina Hendricks) takes the teen on as a client and instructs her how to lie. From that point on, Jesse is a desirable commodity. Everybody wants Jesse for her young appearance, including a motel manager with hints of pedophilia (Keanu Reeves) and a make-up artist (Jena Malone) fascinated and possibly sexually attracted to her youthful skin, though she is supposed to pretend isn’t a factor in her success. This could be seen as a dual commentary on the film industry (and perhaps why the movie is set in L.A. rather than New York), which demands young new female stars as sex symbols every few years, as the older models grow out of fashion. But this is not a problem that Jesse has, other than the attention it brings her which could result in dangerous situations.

The enigmatic quality of Jesse’s behavior keeps the audience on edge. Is she really the prey, or is it possible that Jesse is actually the predator? Never knowing who is in control and who we should be worried for makes the first viewing of The Neon Demon an unsettling experience steeped in dread. This is only broken up by the wonder brought by some of the film’s more impressive visual accomplishments. Some have criticized Refn’s choice of Natasha Braier for cinematographer as a way for him to get away with making a misogynistic narrative. Not only do I disagree with this assessment of the content in the film, but I also can’t imagine anyone else being able to shoot a movie more beautiful than what Braier accomplished.

The Blu-ray release of The Neon Demon is limited in the special features that it has, including to copies of the film in other format and primarily only promotional featurettes in the extras. What it does have is a high definition presentation of one of the most visually spectacular films of the year. And there is at least one worthwhile extra in a commentary track featuring Refn and Fanning discussing the process and meaning of the movie. The other two extras are promotional, selling both the film and its energetic techno score.