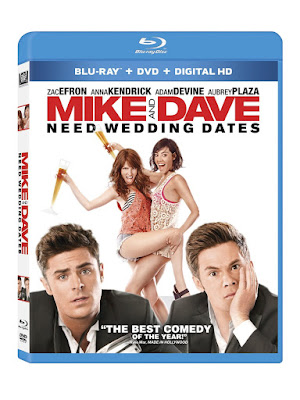 Half of these added jokes are more crass than clever and Aubrey Plaza never seems capable of hiding her own amusement in her ability to improvise raunchy lines, but this is still a movie that relies far more on the personality of its actors than the story written by the screenwriters. Even if they likely made themselves laugh more than they did the audience, the only good thing about this film is the cast. At the same time, they are self indulgent and over-the-top, occasionally more annoying than amusing, and rarely resemble real human beings. For Plaza and Adam Devine, the film merely gives them the opportunity to play the same roles that they have been playing since their careers took off, while Zac Efron and Anna Kendrick are given the freedom to join them. The only thing missing are the actors playing the comedy straight, so that this is just a movie with a lot of over-the-top characters which are only topped by the absurd comedic scenarios provided by screenwriter.

The basic premise that very poorly connects the narrative together involves two brothers named Mike (Efron) and Dave (Devine) in desperate need of dates for their sister’s wedding. Having a reputation for being wild party animals that ruin every family function, Mike and Dave have been tasked to find two nice girls as dates for the destination wedding in Hawaii. Because this is an idiotic movie based on the stupidity of people in real life, Mike and Dave somehow think that Craigslist is the place to find nice girls as their dates, and instead end up attracting their female counterparts in Alice (Kendrick) and Tatiana (Plaza).

In need of a vacation from their lazy lifestyles, Alice and Tatiana put on a show for Mike and Dave by pretending to be far more respectable than they are. Even if this basic set-up initially seems promising, the film doesn’t develop the story beyond this premise. The remainder of the run-time is filled with a series of lazily constructed gags, saved only by the scenes of improvised dialogue between these four leads. When the supporting cast tries to get in on the humor, it becomes overkill. Every actor in this movie is trying to get laughs, and though their individual performances may be highlighted by this approach, the overall film suffers. There is no tonal variety in the humor, little difference in the styles of comedy attempted by each cast member, and a series of characters that all feel written in the same voice. It’s like a Will Ferrell movie where all of the co-stars are trying to imitate Ferrell, no cast member willing to sacrifice their laughs to make a more coherent film.

At times the competitive comedy of the cast leads to an inspired moment of humor, but the overall film is far less memorable than the individual moments within it. A great deal of the enjoyment the film has to offer also relies on preexisting opinions of cast members. As many reviewers pointed out, several of these actors seem to be playing roles that feel lifted from other movies that they have done recently. If you like these actors from what they have done in the past, Mike and Dave Need Wedding Dates doesn’t challenge these images in any way.

The Blu-ray combo pack also comes with a DVD and Digital HD copy of the film. The special features show how much of the movie was improvised, with over 90 minutes of additional footage. There are deleted scenes, line variations for jokes, an alternate storyline, and even a longer gag reel to go with the one played over the credits. This is one of those cases where there was far more laughing onset than there likely was in the theaters showing the film. There are also some promotional “Funny or Die” shorts and a commentary track with director Jake Szymanski.