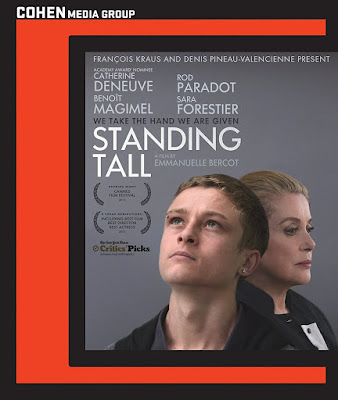 Although the plot structure follows an expected arc of reformation, the delinquent coming-of-age tale of Standing Tall remains dedicated to a vision of social realism. The characters are so flawed and make so many atrocious mistakes over the repetitive narrative that we are justified in doubts about the sudden redemption found in the final minutes of the movie. Occasionally the insistent use of stark realism threatens to push the movie into melodramatic territory, regardless of how raw the performances and camerawork are.

The life of Malony (Rod Paradot) begins roughly when he is abandoned by his mother in the office of a children’s magistrate named Florence (Catherine Deneuve). As Malony grows into an angry and rebellious young man, Florence begins to see him more often. His first offenses land him in a juvenile education center for delinquent boys, though future trouble threatens real jail-time and a troubled life of crime. At nearly every turn of the film this bleak future seems inevitable, though that does not stop those around Malony from altering this path.

Along with Florence, Malony is assigned a caseworker named Yann (Benoît Magimel), whose own rough childhood makes him an ideal candidate for the job. Malony also develops a relationship with a teenage girl named Tess (Diane Rouxel) while at the center, though this storyline is as troubling as it is necessary to the overall redemption of his character. Not only does Tess look remarkably similar to Malony (even wearing a matching haircut), making it difficult to tell the difference between them during some of their more intimate moments, but his physical treatment of the young girl is also often appalling. For all of the crimes he is punished for, the worst ones are the ones he gets away with. The switch feels too sudden, and Malony is never really held accountable for all of his actions, even after the many encounters with the courts.

The outbursts of anger by Malony can reach extreme levels, which always seem to be teetering between realism and contrivance. This is not a comment on the acting, however, which remains consistently believable throughout the film. This is an actor’s film, with each of the cast members lending a significant hand to the feel of the film, though it is clearly Paradot’s film. Structurally, the film rushes the resolution in favor of dragging out the melodrama. My only wish is that we would have been given a better opportunity to see Paradot display a gradual change in Malony.

The Blu-ray release of Standing Tall comes with a few special features, though the high definition itself isn’t a necessity for the un-stylized cinematography. The extras include 8 deleted scenes, with optional commentary by director Emmanuelle Bercot. There is also an episode of “Inside the Film” with Bercot, Magimel, and Paradot, and a trailer.