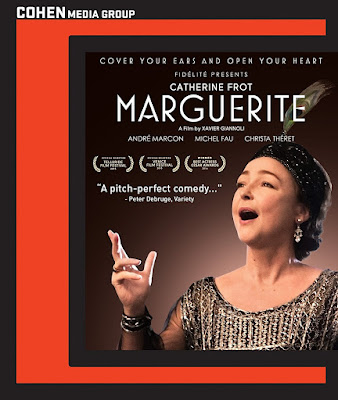 If the premise for this French satirical backstage musical from last year sounds familiar, that is likely because of a similar American production this year. Marguerite is loosely based on the true story of tone-deaf singer and socialite Florence Foster Jenkins, which was the name of the American film with Meryl Streep in the title role. But Marguerite came first, with the wonderful Catherine Frot in the role of the delusional vocalist. If a bit overlong and repetitive in its themes, Marguerite offers thoughtful commentary on the purpose behind the passion for musical artistry, as well as a magnificent central performance from Frot.

Marguerite Dumont (Frot) is a wealthy French socialite and wife to the important Georges Dumont (André Marcon), who uses his power to protect her from the truth about her abilities. Able to convince all of their friends to keep Marguerite in the dark about her lack of abilities, Georges thinks he has contained his wife with a harmless hobby, allowing him the freedom for an extramarital affair. He ha a carefully prepared (albeit unoriginal) lie to keep him from having to attend the recitals that he arranges for her, each time blaming his car for breaking down. This delicate house of cards is disturbed when an avant-garde nihilist artist (Denis Mpunga) and his journalist friend (Sylvain Beaumont) sneak in to witness a private performance from Marguerite. After an article is written about her, Marguerite suddenly sees an opportunity to perform in front of a real audience and Georges sees the harsh reality that will inevitably crash down on his wife.

The relationship between Georges and Marguerite is the delicate heart of the film, but this is also the element of the story which ends up feeling the most neglected despite a lengthy running time of 129 minutes. Part of the problem is the numerous supporting characters, some of which retain minimal relevance to the main storyline. We follow the gradual advancement of a successful young singer’s career (played by Christa Théret), essentially only because of her initial job singing in one of Marguerite’s private recitals and for the filmmakers to show a parallel path in singing. While this is an interesting comparison, the character never comes to life enough to feel relevant in the story of Marguerite, and Théret’s performance is so subdued that it occasionally feels noncommittal.

The remainder of the film is somewhat repetitive in the narrative journey of its protagonist. With each disastrous performance, each reaction from unsuspecting audience, each pointless effort towards improvement, the impact of these jokes begins to wane. Not enough variety is inserted into the narrative until the final fifteen-minutes, at which point the momentum has already been lost. Frot’s performance makes the film engaging throughout, though it seems she was slightly let down by an unimaginative screenplay and an unfocused edit.

The Blu-ray release of Marguerite includes four deleted scenes and an interview with director Xavier Giannoli. There is also a theatrical trailer.