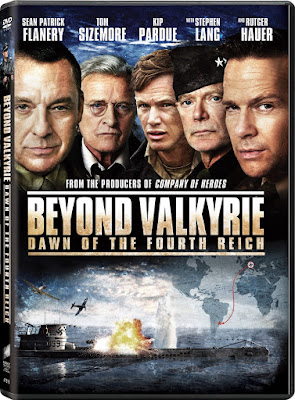 The film takes place near the end of World War II, specifically involving the events surrounding Operation Valkyrie’s attempt to assassinate Hitler. The twist is that this film is about the efforts from American and British soldiers in support of this cause. They are brought in to extract the man intended to lead post-Nazi Germany, but end up fighting the odds when the assassination plans fail. The rest of the film is about their efforts to stop Nazi Officers from fleeing to Argentina, resulting in plenty of sub-par war action.

The overall result of Beyond Valkyrie is far from impressive, but there are moments of inspiration within the filmmaking. At points the oversimplified views of war and patriotism feel like a nostalgic nod to both the films and a mentality from the past. Whether these moments were intentional or not, I couldn’t help but wonder what this film might have been like had it committed to this choice fully. Even that bold choice would likely have had little impact on how poorly fleshed out the characters in the film are.

There are plenty of recognizable actors within this movie, including Sean Patrick Flanery in a leading heroic role and Tom Sizemore in yet another lackluster performance. Even Rutger Hauer and Stephen Lang show up, but I couldn’t tell you who played who, mostly because the characters are never developed enough to be distinguishable. Good moments or not, this is an extremely minor addition into the war genre.