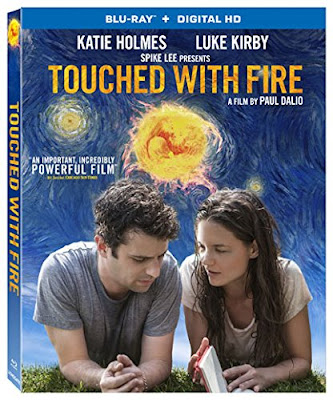 While I appreciated the discussion of mental illness and its connection to artistic creativity within the narrative Touched with Fire, at times the individual scenarios of the specific plot overshadow the larger topic. Writer/director Paul Dalio based the film on his own experiences, and while this brings honesty to the material, it often also runs the risk of carrying romanticized bias of personal memory. In this case, some distance from the content may have helped to create a stronger film. Despite compellingly convincing performances from the lead actors, Dalio’s narrative often feels aimless at best, and predictably melodramatic at its worst.


Without providing much back-story for the main characters, Touched with Fire sets up a meet cute between the two of them in a psychiatric hospital. Carla (Katie Holmes) is a published poet who is struggling to understand her bipolar condition when she unintentionally checks herself into the hospital. Marco (Luke Kirby), who is also bipolar, is put in the hospital when his erratic behavior gets him into trouble with the law. Also a poet of sorts, Marco is naturally drawn to Carla’s creative nature, though it is somewhat convenient that he uncovers her gift when he discovers her book of poetry amongst the donated books in the hospital library. For that matter, the hospital also carries a decent collection of work by other mentally ill artists, either as poor attention to detail from the hospital staff or a convenient filmmaking contrivance to set up thematic parallels.

These two poets immediately strike up a friendship that leads to a romantic relationship, carried out against the wishes of doctors and their family members, with good reason. Soon after their interactions begin, each manages to inspire a manic episode in each other, highs followed by a dangerous low. Marco becomes so depressed that he is removed from the hospital, separating him from Carla in the process. Perhaps this is similar to the actual measures taken by psychiatric hospitals, but Touched with Fire makes no effort to explain why. The focus of the film remains on the task of creating empathy for the two lovers kept apart, rather than an understanding for how their illness is treated.

This continues with the discussion of medication, which I am certain must be specific to each individual case. Instead of making the uniqueness of each case clear, Touched with Fire makes broad statements about medication, manipulatively using the emotions of the narrative to make a case for the same treatment of all struggling with bipolar disorder. Although I am certain that medication has helped many who suffer, the broad statements of this narrative often feel more like propaganda for the pharmaceutical industry than the story of two individuals. Beyond this issue of drugs, I was at a loss as to what other point the film was trying to make. Any time the direction of a film’s screenplay is unclear, all that is left are the characters. Holmes and Kirby give raw performances in the two leads, but even this is not enough to save the film from the uncertain direction of the narrative.

The Blu-ray release includes a Digital HD copy of the film. Although there is little need for the high definition disc, the special features are far more plentiful than expected. Among the extra is a thoughtful featurette with a conversation between Dalio and psychiatrist, as well as a candid commentary track with the filmmaker joined by producer Kristina Nikolova and a fairly generic making-of featurette. There are also a handful of deleted scenes, a photo gallery, and the theatrical trailer.