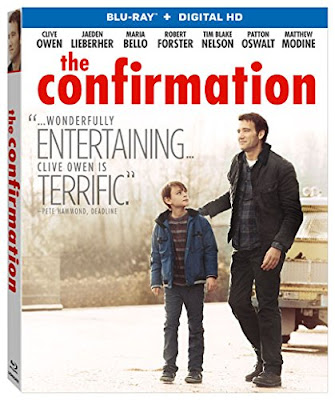 Much of the narrative in The Confirmation has been done previously, and occasionally with far more dedication to realism (there are moments which bring to mind Vittorio De Sica’s Bicycle Thieves), but it is in the optimistic tone and engaging performances that this film finds its stride. Like the Oscar nominated film, , which first-time director Bob Nelson wrote the screenplay for, The Confirmation is often equally hilarious and heartbreaking. Nelson understands as a filmmaker that these two things need not be mutually exclusive, which grounds the film without drowning audiences in cynicism and sadness. Some may find the resolution a bit too neat (especially those expecting the Bicycle Thieves similarities to play out), and others may find the film’s morality a bit too flippant. This is a balancing act between two extremes, likely to leave both sides slightly unsatisfied, while neither outright disappointed. A few more risks in the narrative may have solved this problem, or it could have brought the entire house of cards tumbling down.


Taking place over the course of a weekend, eight-year-old Anthony (Jaeden Lieberher) is to spend far more time than usual with his father, Walt (Clive Owen), a carpenter suffering from personal and financial set-backs. A carpenter by trade, Walt struggles to make ends meet freelancing from job to job, driving a truck that threatens to break down and living in a small home that he is dangerously late on the rent for. To make matters worse, Walt is an alcoholic attempting to go cold turkey for the weekend with his son.

Despite being somewhat familiar with his father’s situation, Anthony comes from a different lifestyle with his mother (Maria Bello), a devout Catholic living with her clueless but stable new husband (Matthew Modine). Their relationship retreat is what gives Walt the opportunity to show he has the ability to be a father to Anthony, at least for one weekend. What is intended to be an uneventful couple of days for the young boy about to be confirmed in the Catholic Church, ends up becoming an adventure in questionable morals and a series of complicated life lessons.

The misadventures between father and son begin with the theft of important woodworking tools, followed by the loss of both vehicle and home. Suddenly Walt is forced to scramble like never before, this time with his son to be taken care of. Along with needing a healthy dose of creativity in order to survive, Walt must hunt down the stolen tools in order to complete a job he has acquired for Monday morning. Anthony also finds a solution to his problem of having no sins to confess at church, suddenly put in many morally questionable situations in order to help his well-intentioned father.

Despite Nelson receiving acclaim as a screenwriter, this is where The Confirmation is often on shakiest ground. The film often only succeeds due to the dedicated performances, which are enough to overcome some transparently contrived and painfully predictable situations. This doesn’t just include the two leads playing father and son, though they certainly carry a majority of the film’s weight, but also the various supporting characters that they meet along the way. None are mere caricatures, but instead feel fully developed and fit well in world of low-income survival. Those who steal don’t feel like villains so much as desperate individuals with limited options and decreasing hope.

The Blu-ray special features include two featurettes, covering the characters and the performances of the film. The high definition disc also comes with a Digital HD copy of the film. There is little in the visuals or audio that requires the upgraded presentation.