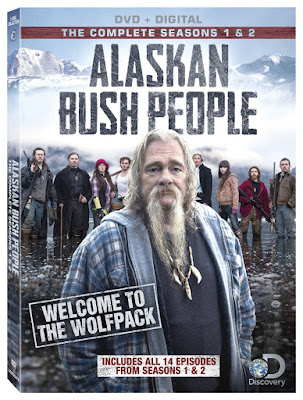 When the Discovery Channel reality series “Alaskan Bush People” first aired on television, many viewers were skeptical of the authenticity. Some theorized that the family claiming to have lived in the wild for the last 30 years was merely a group of actors, while others simply didn’t believe the outrageous claims of survival that they made to the cameras. Personally, I am hesitant to believe anything in reality television isn’t at least somewhat contrived. Although I have no reason to believe that this family isn’t related, I also have little faith that many of the situations in the show aren’t staged to a certain degree. Even in the trivia section of the series on IMDB.com, the episodes are referred to as “reenactments” of events taken from Billy Brown’s book. It automatically raises a red flag when the man claiming to want nothing from civilization has promoted himself through the publication of books. Others have found YouTube channels and other websites with other members of the family also trying to increase their fame.


Their shameless self promotion and obvious desire for attention and fame that contradicts their supposed lifestyle is only the tip of the iceberg. Each episode brings questionable elements which make it near impossible to believe the authenticity of the show. Despite claiming even a shower to be a luxury, their youngest daughter sports highlights in her hair for the first season, until dyed brown for the second. Each time the family members go into civilization, they claim that the looks that they receive from people is because they are outsiders, though it is far more likely because they have a Discovery Channel camera crew following them around. There is also the fact that they endlessly brag about their abilities, though they often fail at tasks they claim to excel at. Is the show entertaining? Absolutely, but that doesn’t make me believe any of the things that are said or shown. A mere search on the internet will provide plenty of material to contradict nearly every outrageous claim.

What really makes the show engaging is how ridiculous each family member is, and how bad they often make themselves look in their shameless boasting to the cameras. Billy Brown is the family patriarch and often the most arrogant, though he conveniently falls ill or becomes injured right before any real tasks need to be completed. Billy married a like-minded woman and had a litter of children/aspiring actors, all of which spend a bit too much time preoccupied with how they look for the cameras rather than simple survival. Each of the children has a name that sounds like a child came up with it. Bam Bam was named after his grandfather’s favorite cartoon character. Bear is only a nickname, but it seems a ridiculously stupid one considering the animal he is named after is a real threat where they live. What happens when a real bear comes into camp and they are all used to hearing his name shouted out on a daily basis, unable to distinguish his name from a warning of real dangers. And most absurd is the youngest daughter, whose name Merry Christmas Catherine Raindrop Brown causes a reaction when visiting a local dentist. Don’t feel too bad for her, though. Skeptics caught her wearing an Apple watch, despite the family’s claims at being unable to afford luxuries and complete ignorance of this type of technology. I wouldn’t be surprised to discover even the name is fabricated.

There are fourteen episodes making up the first two seasons, all included in this three-disc set. There was enough criticism over the fake elements of the show, the first season even has an entire episode with the family members addressing these issues. This is merely an opportunity for them to repeat the same lies, with no evidence to back it up. I can’t understand how anyone can believe that this show is real, but even those who know it is fake may find it mildly amusing anyway. The three-disc set also comes with a Digital HD copy of all fourteen episodes.