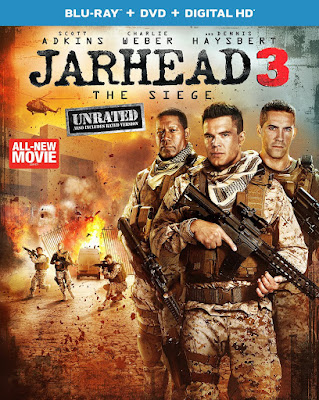 Jarhead, the 2005 war film from director Sam Mendes, is an unlikely movie to build a franchise from. The reception was mediocre, the action was nonexistent as intentional commentary on the state of modern warfare, and there was little opportunity for significant characters to return. Thematically, the sequels don’t even belong in the same category, much less carrying the same title. They get away with this by carrying over a supporting character and turning the franchise into mindless action. While it may not be cut from the same cloth as Jarhead, it is rather predictable for a straight-to-video sequel.


Like the Behind Enemy Lines franchise, Jarhead 3 merely gives us a new protagonist and situation for them to be thrown into. This time around it is Marine Corporal Even Albright (Charlie Weber), and he is sent to a embassy in the where an attack by an extreme militant group threatens the safety of all inside. If this premise sounds strikingly similar to ’s film, 13 Hours, I imagine that isn’t entirely unintentional. In many ways, this feels like a fictional hero-fantasy version of the same events, providing the opportunity for ridiculous action and a contrived conclusion.

When Albright first arrives at the embassy, he struggles to learn that he must rely on his fellow marines in order to succeed. Ironically, it all ends up falling on his shoulders to save the American ambassador when the attacks disable their defenses. Despite throwing in a few random moments of patriotic mumbo-jumbo, the film quickly devolves into outrageous action more likely to be seen in a bad ‘80s film than in actual combat. Though the stakes are raised by the loss of characters along the way, most of them are so generic that it makes little difference and has no emotional impact.

Leading up to the action is an introduction to the cookie-cutter characters, many of which will be sacrificed along the way. Albright’s superior is the tough Gunny Raines (Scott Adkins), only distinguishable by the C-list actor hired to play him, as well as Major Lincoln (Dennis Haysbert), a mostly absent character used as a thin connection to the original film. There is also the arrogant ambassador (Stephen Hogan) who ignores warnings of the attack at the peril of the embassy, pointless eye candy casting (Sasha Jackson), and an obnoxious documentary filmmaker (Dante Basco) providing bad found-footage perspectives and worse comedic relief.
Jarhead 3 tries to be both entertaining and patriotically accurate, though these two things are in constant conflict with each other. At times it succeeds at one or the other, but never both at the same time. More often than not, it is unsuccessful at both. The Blu-ray special features include a making-of featurette, as well as two additional ways to view the film. The combo pack comes with a DVD copy and a Digital HD code.