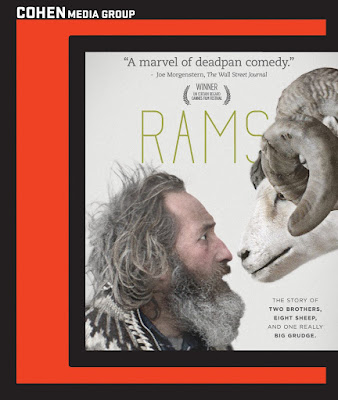 Gummi (Sigurður Sigurjónsson) is a sheep farmer living nearly entirely in the seclusion of a remote valley, despite having an immediate neighbor on his property. Living beside him is his brother, Kiddi (Theodór Júlíusson), but neither has spoken to each other in four decades. Both carry out their family tradition of raising their ancestral breed of sheep with pride, never speaking of the disagreement which split them apart after the death of their parents. Their rivalry is carried out in livestock competitions until a lethal disease infects Kiddi’s sheep and threatens the livestock in the entire valley.

Many are crippled by this sudden outbreak, but Kiddi and Gummi refuse to leave their way of life. Each has a plan for saving their prize rams and the famed sheep lineage, though they eventually must rely on each other to avoid discovery by the authorities. Kiddi’s reaction is more volatile, turning to his gun for protection and alcohol for comfort, whereas Gummi cleverly pretends to obey the laws demanding all stock be slaughtered, secretly hiding a prize few in the basement of his home.

The narrative is wisely simplified, slowing the pace and allowing for the subtleties of the characters to come to the forefront. This provides the film some of its deadpan humor, but it simultaneously fleshes them out in a way that we begin to care about them, despite their curmudgeonly demeanor and minimal dialogue. A great deal of the film’s success relies on the acting of the two leads, and their grizzled appearances help to make their solitude and career choices all the more believable. This is enhanced by the unforced way that the brothers are reunited, never feeling contrived or emotionally manipulative as one might expect from a Hollywood attempt at the same story.

The Blu-ray release includes an interview with the director, Grímur Hákonarson, as well as one of his earlier short films. There is also a theatrical trailer for the film.