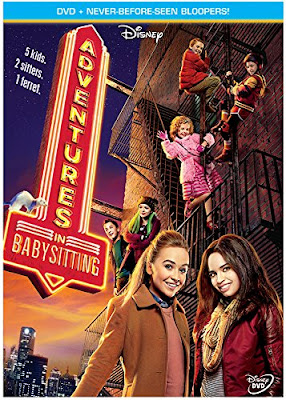 Adventures in Babysitting begins with a harmlessly derivative set-up involving two girls with completely different approaches to life. Jenny (Sabrina Carpenter) is a responsible high school student portrayed as uptight and rule-obsessed, whereas Lola (Sofia Carson) is a nineteen-year-old artistic personality unafraid to do illegal and immoral things on a whim. Lola is portrayed as fun despite her irresponsibility, and Jenny is seen to be stuffy despite being exactly the type you would want to care for your kids. These two accidentally exchange their cell phones when competing for the same internship, despite the fact that Lola has made obvious artistic alterations to the phone which would be instantly noticeable. Lola uses Jenny’s phone and lies her way into a babysitting job, unconvincingly bringing the pair back together again when one of the children escapes to see a concert in the city.

Jenny and Lola predictably end up stranded in the city with the five children, mostly due to their own lack of common sense. When they somehow become involved in a ridiculous scheme involving a stolen ferret, they are chased by a pair of inept criminals who spend most of the film resembling bad copies of the Home Alone crooks, prat falls and all. The kids continually outsmart them, all the while coming up with numerous illegal schemes to get back home. When scalping a concert ticket gets Lola arrested, she is fortunate to run into a beat cop in his mid-twenties that she can flirt with. This city cop will somehow track the 19-year-old down in the suburbs later for an extremely creepy romantic resolution. The final lesson for the babysitters comes when they successfully steal the money needed to get home, taking it from the parents paying them to do their job in the first place.

I know the original Adventures in Babysitting was not void of edgy material as a PG-13 release, but at least it didn’t attempt to hide behind the Disney logo and a series of sanitized set-pieces while giving the young viewers questionable lessons about lying, cheating, and stealing in order to have fun and get your way without getting caught. This film can’t decide what it wants to be, and ends up inappropriate for all. Younger audiences don’t need a lesson on being more irresponsible, and older audiences will scoff at the portrayal of city nightlife, including the vomit-inducing babysitter rap sequences which take place when the kids sneak into a nightclub. I can’t imagine who this film is for, other than those unable to think critically about the garbage they are being fed.

The sole special feature is a collection of outtakes in a blooper reel.