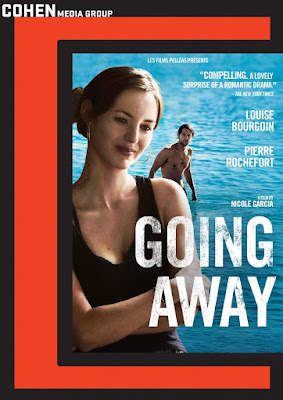 Romanticizing the loner as cinema often does, Going Away begins by introducing us to Baptiste (played by Garcia’s real-life son, Pierre Rochefort), a roving primary schoolteacher who makes a point out of switching schools each term. Even when offered a full-time position, Baptiste politely refuses for unknown reasons. Despite an unwillingness to make lasting connections, it is obvious that Baptiste is committed to the children and their education. With no apparent friends or family and a shoddy apartment overlooking the school he is currently working at, it seems that this dedication is all that he has.

When one of his pupils named Mathias (Mathias Brezot) is abandoned by his neglectful father over a holiday weekend, Baptiste volunteers to watch him, taking him to see his ambitiously hardworking mother. Sandra (Louise Bourgoin) is painted with a bit more flawed realism than Baptiste, ambitiously working at a seaside resort in hopes of achieving personal goals of success at the sacrifice of motherhood, but we know immediately that they will end up connecting with each other. Rather than merely dropping Mathias off with his mother, the schoolteacher inexplicably hangs around long enough for this to happen.

The draw mysteriously wounded Baptiste has to the openly flawed beauty that is Sandra would have been believable enough, but the screenplay unwisely seeks to manufacture this through action. Sandra’s failed past endeavors have left her in debt and sought out by a pair of unsavory men looking to collect what she owes. This problem turns out to have a fairly easy solution once Baptiste reveals the secrets of his past, taking the mother and child on a road trip to his childhood home. The biggest issue is consistency in tone and pacing. Going Away seemingly switches genres with each act, and as intriguing as the characters are, they are not developed enough to withstand the jarring narrative shifts.