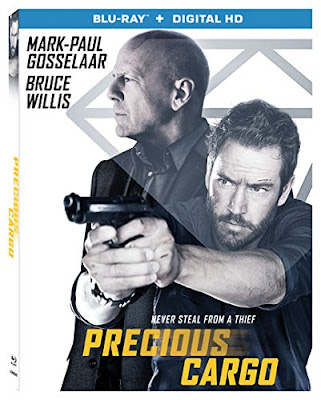 Despite a lot of senseless gunplay, the storyline feels lifted from a number of heist movies, primarily The Italian Job. 1980s television icon Mark-Paul Gosselaar is the film’s actual lead as Jack, a professional thief and con artist who is manipulated into taking a job with his ex-girlfriend, Karen (Claire Forlani). Karen needs help escaping the wrath of a crime boss (Willis) she has wronged, and the former lovers are reunited in one last heist. Then they must perform another final heist when this powerful villain blackmails them. There are priceless jewels, an unbreakable safe, plenty of lies and double-crosses, and pointless chase scenes along the way. The entire endeavor is a bit too by-the-numbers to offer any original thrills, but it is a tried-and-true formula that provides extremely mild entertainment.

Even with a lot of the cast coming off unbelievable in their handling of firearms and some obvious CGI additions in post-production, the action is fairly high in production values. The chase scenes utilize a variety of vehicles and locations, and many of the stunts are competent enough to be believable. The action, while far from perfect, stands up a whole lot better than many of the dialogue scenes. Gosselaar and Forlani are fairly believable, despite the stodgily written dialogue, while some of the less experienced actors suffer and Willis merely sleepwalks his way through the film. Even with a mere 90-minute run-time, there are a few too many scenes with bad acting for Precious Cargo to recover. These include a number of the filler scenes with forgettable supporting characters, but the worst of the bunch is newcomer Jenna B. Kelly, an actress far too young and beautiful to be cast as Jack’s sniper partner to begin with, no matter how many fake scars are added to her face. Her looks may have gotten her the job, but Kelly needs a few acting lessons if she hopes to continue a career once these assets have faded. Her monotonous delivery of the poorly written dialogue contributes the worst that the film has to offer.

The Blu-ray release includes a digital HD copy of the film, along with a handful of generic extras. The special features include a making-of featurette, interviews with select cast and crew members, and trailers for the film.