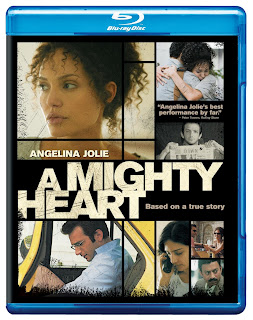 What could be a disadvantage is turned into the main advantage of A Mighty Heart. Based on a highly publicized event which occurred relatively few years ago, A Mighty Heart promises audiences an ending they can already anticipate. Seeming to realize that this was a story everyone will know the ending of before watching the first five minutes, A Mighty Heart takes a factual approach to giving all of details which weren’t reported in the news. Adapted from Mariane Pearl’s book about the events we are given a personal perspective, but also one of precise factual reporting. This along with Michael Winterbottom’s documentary-style directing presents the predictable story into stark levels of realism that is difficult as it is fascinating in the same way a car wreck on the freeway is. Looking means seeing something terrible and horrific that nobody should have to go through, but not looking doesn’t change the fact that it happened.

Soon after 9/11, Wall Street Journal reporter Daniel Pearl (Dan Futterman) and his wife Mariane traveled to to do what they could in terms of reporting the news. They establish a somewhat comfortable existence while working and even with Mariane pregnant they seem to feel safe, until Daniel sets up a meeting with Sheikh Gilani. Daniel meets with several people before deciding to meet Gilani, each warning him to stay in public if he takes the risk of meeting the infamous man. He agrees but when he receives a phone call at the public restaurant he was supposed to meet the man at telling him to leave with some of Gilani’s men. This is the last time he was free and safe, although Mariane’s battle is just beginning. Unable to get her husband on the phone she begins investigating his disappearance, which eventually begins to snowball into a mass effort which proves to be largely in vain. Even as advances are made in the discovery of who was behind the kidnapping, it doesn’t help to accomplish the one thing that seems important throughout the entire film.

Certainly what seems to be an award season film for Angelina Jolie, A Mighty Heart showcases the actress’s ability to adapt into someone else’s shoes, but it also makes use of the reputation she has developed as a person. Jolie and her humanitarian work has been the only thing left for journalists to write about now that she no longer appears to be dating her brother, wearing Billy Bob Thornton’s blood around her neck, and her relationship with Brad Pitt has morphed into much of the same humanitarian publicity with him joining the film as a producer as well. She is obviously a caring person, and it appears that this film is attempting some of that good outside of just an Academy Award nomination. The Blu-ray has and optional PSA introduction about journalists in danger, unafraid to declare the death of before the film has begun. Ultimately this is what A Mighty Heart seems determined to get across; the power and responsibility of information given by journalists. They have a dangerous, important, and often challenging career which is not always respected due to the scum that call themselves journalists in order to feed off of human suffering. The line is so blurred at points that when Mariane is leaving her home and accosted by all of the press looking to make a story out of her husband’s tragedy it inspires rage, and yet her novel of the same events seems a poignant and courageous undertaking to make certain her husband’s death was not in vain.

Along with the PSA, the Blu-ray contains a basic array of special features, seeming intent to keep the film respectful at all costs. There is a brief making-of featurette which goes into some details about the production of the film, but the rest of the features are far more interested in the topic inspiring the film and the positive changes that can be made, rather than the act of filmmaking. Winterbottom recently directed the stark and horrifying documentary, Road to , a film that condemns the treatment of prisoners in , but A Mighty Heart gives just as passionate a cry for these atrocities of war to stop, whatever group or country is involved. The high definition presentation of the film is not a highly significant change from previous viewings, but this isn’t the type of film that lends itself to visual or audio improvements. The story is the true star, even in the Blu-ray treatment of the film.