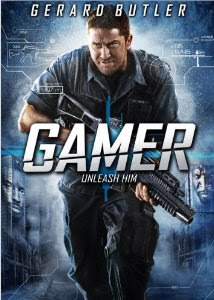 Filmmakers Mark Neveldine and Brian Taylor (who simply go by Neveldine/Taylor in credits) have made a name with their frantic stylistic choices and shock value sex and violence. Previously utilizing the persona of Jason Statham for the Crank franchise, Gerard Butler seems a perfect casting choice for Gamer. Though Gamer takes story and narrative more seriously than the Crank films, both utilize subtle satire alongside clunky filmmaking. The relevance of the film is interesting, the storyline intriguing, and yet there are too many loose strings in the screenplay for this to be a film worth thinking about. Although Gamer raises some intriguing scenarios, there is difficulty with follow-through.

The initial premise of the film is introduced with an overkill display of the popularity of Kable (), the star character in a futuristic game. Like so many near-future films of the recent past, this game offers the promise of release to death-row inmates should they survive thirty rounds. What makes the game unique is the lack of control. The convicts aren’t able to control whether they live or die, because they are actually controlled by gamers who pay to play for real blood.

There is only a short section of the film in which we see the point-of-view of the person playing the video game, though this is by-far the most inventive visual shot in the film. It is a shame that more of the action was not seen through this angle rather than the head-ache inducing editing that is mostly used. With every shot lasting less than a second, the action sequences don’t resemble a video game. The same problem that there are in the action sequences seems to run rampant through the entire film, or all of Neveldine/Taylor’s films, for that matter.

There is actually a surprisingly small amount of action that takes place inside the video game. The screenplay is instead convoluted with numerous ideas and tangents as the filmmakers seem unable to keep their attention span on any one thing long enough for it to develop. Some of the tangents are interesting, though the main storyline is neglected for the chaotic collection of concepts for future human devastation and destruction. For instance, what do we learn about the boy playing Kable aside from his high-tech computer/entertainment bubble. He is introduced, used, and quickly dismissed without resolution. There is no time for resolution in this film. Characters are introduced and killed quickly and unemotionally, simply in order to keep the film moving.

Michael C. Hall co-stars as the villainous Ken Castle, the creator of the technology for the game, which served as a way to enslave the poor and disenfranchised for the entertainment of the wealthy. The implications are obvious in these difficult economic times, but the film never commits to anything beyond the action for resolution. The video game universe is the highlight of the film, including many oddities of the gaming world that will only be familiar to avid players of violent games. There are always innocent civilians that seem oblivious to the constant battle near them, excessive violence and predictable behavior.