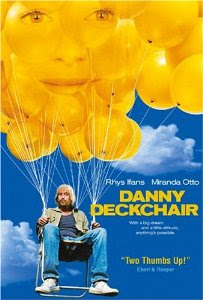 Occasionally it is nice to watch something light, especially with some of the darker films coming out around this time. The problem is that most filmmakers have a hard time making films light without turning them slightly stupid at the same time. Danny Deckchair is a fun film that isn’t to be thought about too much, but it wouldn’t hurt it if you did.

Danny is a cement truck driver that is unhappy with his life. He doesn’t like his job and all he is looking forward to is a vacation. Even this changes suddenly when his girlfriend, Trudy, comes up with an excuse to skip it. Stuck at home with nothing to do, Danny begins to get creative. After a fight with Trudy, Danny buys as many balloons and as much helium as he can, and soon he is floating off in the seat of his deckchair.

Danny flies right out of and into a small town called Clarence. At this point the film begins to resemble The Majestic in many ways, though the most obvious comparison to any modern audience will be Pixar’s Up. Nobody knows who Danny is, so he I able to recreate himself. He cleans up and takes a job helping with an election campaign, all the while winning over the woman whose tree he landed in.

Rhys Ifans has an unmistakable charm about him, especially once he shaves and cuts his hair. Once he does this it is amazing to see that he as been cast in roles such as the flat mate in Notting Hill who had the unforgettable photo session in his underwear. Miranda Otto, who plays Glenda the love interest, also seems to fit well into the romantic comedy role. There is something more fragile about Glenda than is usually seen in these sorts of films and it is a refreshing change. Ultimately there is nothing drastically amazing about Danny Deckchair, and yet it is a great date movie and time well spent.