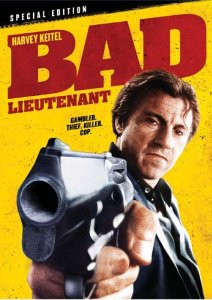 Abel Ferrara’s deeply disturbing morality tale of a crooked cop who is no more harmful to everybody he encounters than he is to himself on a daily basis. The film is all about the lead performance, and like Martin Scorsese’s Taxi Driver, the protagonist is not at all admirable. In most ways, he is downright despicable. Bad Lieutenant stars Harvey Keitel as the nameless cop who uses his power to live a reckless life of addiction. Although he is living a sinful life full of indulgences of escape, there is nothing pleasant or admirable about the way he lives. films with such unrelenting honesty that Bad Lieutenant received an NC-17 rating, though not at all for titillating reasons. The NC-17 is appropriate as a label of how mature the subject matter.

Although the cop has a wife and kids, he is rarely seen at home. Nights are spent prowling the city, looking for easy prey and quick distraction from the guilt and shame which has built up over the years of abuse. He uses cocaine so regularly that there is a tense manner to his behavior the few moments he is sober with his children. The marriage he may have once cared about has also disintegrated, the lieutenant only using the home to crash for brief periods at the end of the night. Mostly he spends his time roaming the city, always as a cop but never working. He interrupts a police investigation of a robbery to steal the money from the thieves, provides cover for the drug dealers in order for free product, and sexually abuses women in exchange for inaction.

This behavior doesn’t even seem to be appealing to the dirty cop, but he follows the routine anyways. Even while in the company of prostitutes and high on drugs, he breaks down. The only point of hope for the crooked cop comes from the horrifying rape of a local nun. When the victimized woman decides that she wants to forgive the assailants rather than condemn them for their crime, the guilty cop becomes fascinated, seeming to see his own redemption in her seemingly senseless forgiveness. This doesn’t stop his ill behavior, only occasionally slowing it, but it changes his demeanor some. Living his life as though it may end at any moment, and at times acting in ways that will hurry the process, the option of redemption and escape seems to appeal the hurting criminal of a cop.